For marine species that rely on acoustic cues to navigate, find food, or select mates, sound is a key element of their environment. But the ocean is getting noisier.
ABSTRACT ONLY Only an abstract of this article is available.
PEER REVIEWED This article has been peer reviewed.
Summary By: karol orzechowski | This is a summary of an external study | Published: March 19, 2016
Photos by Flickr user mattallen89 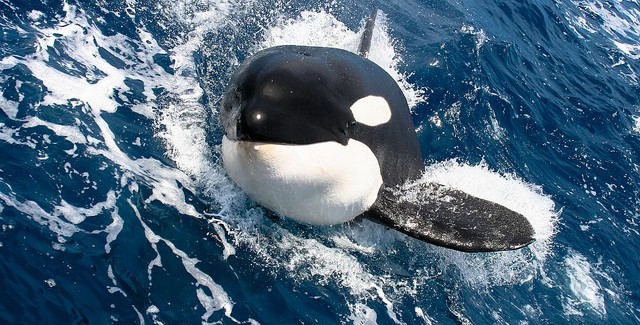 If you’re a regular Faunalytics reader, you may be familiar with how noise can affect whales. From right whales to killer whales, we’ve shared studies that looked specifically at ship noise in sensitive areas and how it can negatively impact whales. However, it’s important to remember that the ocean is full of noise and not all of it comes from human activity. There are both “biotic and abiotic” sources of noise and although we have relatively recent measures of ocean noise, we do not have much historical perspective on what “normal” noise levels might be. For whales, who depend on the acoustic environment of the oceans to communicate, the level of ambient noise is crucial. A cluttered acoustic environment can disrupt the activity of whales in a number of ways and “acoustic health” of the environment is important not just for whales, but also other that species suffer when the ambient noise in the oceans increases.

This study sought to “evaluate and compare the influence of chronic noise on communication space of three cetacean species across a broad region over multiple years.” In particular, the authors looked at a specific whale habitat in British Columbia (BC), Canada. Measuring noise levels at twelve sites along the BC coastline “as a proxy for a communicating whale,” the researchers estimated loss of communication space for fin, humpback, and killer whales. They also compared the “habitat-level variability in lost communication area” for the different whales to try to understand the implications that including noise as a measure of environmental health could have both in BC and elsewhere. In this sense, the study focuses on a specific area while also zooming out to examine the broader implications of acoustic health. 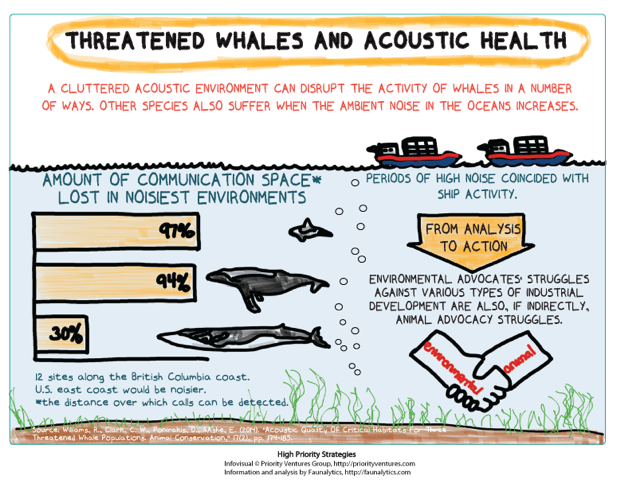 Based on these results, killer whales and singing humpback whales certainly suffer the greatest effects of ocean noise, perhaps based on the frequency of their songs and the interaction with ambient noise in the same frequency range. When comparing the audio data from the quietest times and the loudest times, researchers suggested that wind speeds may have an effect, but instead they find that periods of high noise coincided with ship activity. More specifically, the pattern of noise “showed a strikingly diurnal pattern,” with ship noise present in the daytime and absent in the night. One encouraging point to note is that the quietest sites in this study, which were primarily mainland inlets, had “substantial periods” of quiet time. Of particular note, they were also “quieter than any recorded off the U.S. east coast.”

The question on the minds of many wild animal advocates might be, what can we meaningfully do about ship noise? The study itself may give the most succinct answer: “there is no legal requirement to keep [these] habitats quiet. These quiet areas are poised to become much noisier, given a number of major industrial developments proposed.” The researchers go on to note that projects like oil and gas pipeline construction, associated oil and liquefied natural gas (LNG) tanker traffic, and new and expanded LNG, coal, and cargo container port terminals” are particularly concerning. This kind of activity would make the quiet areas noisy and the noisy areas even noisier.

This is a reminder that environmental advocates’ struggles against various types of industrial development are also, if indirectly, animal advocacy struggles. This issue of ship noise affecting ocean animals would seem to be an area of obvious intersection. Coalition building with environmental groups can be vital and helping with one issue can sometimes have a positive effect on other issues. Although the overall findings are grim, the authors of this study offer some hope. The “once-normal windows of quiet still exist out there,” they say. It’s up to us to steer ourselves back towards a quieter relationship with the world’s oceans and their inhabitants. 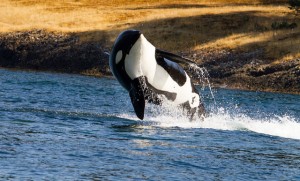 Underwater ship noise has a slight impact on killer whales' movements and may limit their ability to catch prey, but the effects could be even greater.