Australian humpback whales have made a great population recovery, to the point that some think their conservation status should be revised.
FULL TEXT The full text of this article is available.
PEER REVIEWED This article has been peer reviewed.
Summary By: karol orzechowski | This is a summary of an external study | Published: October 20, 2015
Photo by Flickr user slobirdr 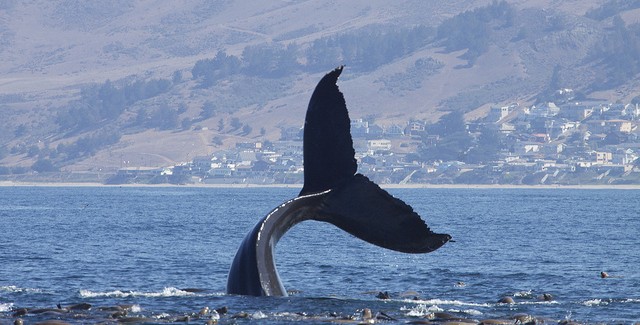 Every once in a while there is a study that comes across our desks that gives us more than the usual amount of hope for animals. In this case, it is a study about Australian humpback whales and their remarkable recovery in that region. After a fairly long history of population decline due to anthropogenic (i.e., human-caused) activities like whaling and interference such as ship traffic and noise, humpback whale populations were not doing very well. What’s more, they were considered to exhibit many of the characteristics of “Ehrenfeld’s hypothetical most endangered animal”: they have a large size; they have long lifespans; they have a late reproductive age with few offspring; they have a fairly high commercial value; they have spatial distributions that cross international boundaries; and they have behaviors that place them at risk from a number of anthropogenic activities. All of these factors have left humpback whales (and marine mammals more broadly) in a bad spot.

However, there is room for hope, or optimism, or both – though, as this study explains, some conservationists even debate the differences between the two terms – as it looks like humpback whales are making a strong comeback in Australia. Specifically, the study presents “an argument to revise the conservation status of the population of humpback whales (Megaptera novaeangilae) that inhabit Australian waters under the Environment Protection and Biodiversity Conservation Act 1999 (EPBC Act).” The scientists note that while this would provide “a sensible and suitable opportunity to celebrate the recovery of an iconic species,” they wish to do so “without dismantling existing legislative protections from new and existing threats.” In other words, while there may be room for hope and optimism, it is careful hope and cautious optimism.

Supporting their claim, the authors note that the International Union for Conservation of Nature (IUCN) has downlisted the global status of humpback whales from a Red List category of “Vulnerable” to “Least Concern,” based on trends in the observed data that note that “the likelihood that current abundance estimates (460,000 whales worldwide) are greater than 50% of the species’ abundance in 1940.” Even though the IUCN acknowledges that some regional sub-populations still need attention and remain potentially threatened, the overall global status is not significantly impacted, and is “recovering strongly.”

In Australia in particular, the researchers note that “despite the devastation caused by whaling, recent monitoring data suggest a rapid recovery of both Australian humpback whale populations.” They point to population monitoring of several of the largest breeding groups of whales and note that since 1986, they have seen rates of increase of about 10-12%, with the population rising from 1,100 whales in 1986 to 14,552 whales in 2010. Based on the year to year numbers, the authors say that “scientific evidence does not support the listing of humpback whale populations on the EPBC Act list of Threatened species.” Still, as noted before, the optimism is cautious, and the authors show that just because a species is downlisted in one region, it doesn’t mean their overall protection in other areas needs to change.

This study, while not a definitive “last word” on the subject, should provide some measure of both hope and optimism for marine mammal advocates. The authors are willing to concede that changing the conservation status of humpbacks in Australia will “inevitably produce new challenges for species conservation and management,” but they still say that humpbacks in Australia represent an exemplary model of recovery, “especially within a marine environment experiencing rapid and concurrent expansion in industrial and exploration activities.” For advocates, the conclusions of this paper show that success can be achieved on two levels: first, that it is indeed possible to implement contentious international management policies that protect marine animals; and secondly, that with proper investment in conservation science, humans can react in ways that are not focused on profit and material gains. These two things are cause for celebration by any measure.