This paper evaluates the economic argument for ending the Canadian commercial seal hunt, and explores public opinion and government policy.
ABSTRACT ONLY Only an abstract of this article is available.
PEER REVIEWED This article has been peer reviewed.
Summary By: Faunalytics | This is a summary of an external study | Published: February 17, 2010
Photo by Flickr user SilverLeapers

Since the mid-20th century, the public has opposed seal hunts. However, the Canadian government defends the practice by arguing that seal pelts are an important source of income for hunters, that killing methods are humane, and that these hunts are sustainable. This paper evaluates the economic argument for ending the Canadian commercial seal hunt.

This study finds that, in general, the benefits of ending the commercial seal hunt exceed the costs, also arguing that there should be a higher criterion (the Pareto criterion) for ending the commercial hunt. More specifically, this means that the hunt should end only if the winners compensate the losers, for example through the implementation of a system of individual transferable quotas (ITQs), which would allow the market to determine the value of the commercial seal hunt. In addition, this ITQ market would provide the means by which those willing to pay to end the hunt could do so directly to seal hunters, thereby ensuring that the hunt is scaled back or ended. 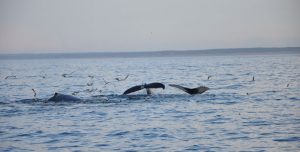 Slaughtering the Goose that Lays the Golden Egg: Are Whaling and Whale-Watching Mutually Exclusive?