Human-coyote conflicts can be reduced by tailoring messages to specific audiences, based on their prior experience with coyotes.
ABSTRACT ONLY Only an abstract of this article is available.
PEER REVIEWED This article has been peer reviewed.
EXTERNAL STUDY This is a summary of an external study.
Summary By: Laura Thomas-Walters | Published: April 3, 2018
Photo by Flickr user pt101

Coyotes live across North America in many different habitats, including those where people also live. As a result, human-coyote conflicts (such as coyote attacks on pets) are increasingly common. Effective communication that helps people understand how their behaviors can minimize conflict with coyotes is, therefore, necessary.

Messages that encourage people to change a specific behavior can be worded to focus on the benefits of changing that behavior or on the risks of not changing the behavior. This is called gain framing and loss framing, respectively. For example, the message “giving up meat could improve your health” is a gain-framed message while  “eating meat could increase your risk of colon cancer” is a loss-framed message. Previous research has found that the type of message framing people find more persuasive depends on context. When it comes to disease prevention behaviors, for instance, messages that focus on the benefits to be gained are generally most effective.

Message effectiveness can also vary depending on its point of reference: does the message focus on the benefits or risks to the person reading the message or on the benefits or risks to others? For example, consider the gain-framed messages “giving up meat could improve your health” and “giving up meat could save the lives of hundreds of animals.” The first message focuses on the benefit to the individual while the second focuses on the benefit to others (i.e., animals). When trying to persuade people to act in a way that benefits communities or the environment, both tactics have been shown to work, but other-referencing messages do not target the choices of individuals and, therefore, are less likely to elicit a defensive response.

In this study, researchers wanted to see how effective gain- and loss-framed messages (focus on benefits or risks) that used either self-referencing (family) or other-referencing (community) were at persuading people to adopt behaviors that reduce human-coyote conflicts. The researchers recruited 461 study participants from Florida, where coyotes are common and their numbers are growing. The sample included a mix of males and females living in both urban and rural areas. Participants were randomly assigned to either a control group (no message) or an experimental treatment where they were presented with one of four message types: 1) gain-framed and family referenced, 2) gain-framed and community reference, 3) loss-framed and family referenced, or 4) loss-framed and community referenced. The title of each message type is shown in Table 1.

Participants in each of the experimental treatment groups read a message explaining that a major cause of human-coyote conflict is leaving food out where coyotes can get to it and come to rely on it. The message further recommended making food sources unavailable to coyotes. Participants were asked how the message made them feel, as well as about their past experiences with coyotes. They then rated their likelihood of performing problem-prevention behaviors within the next year on a seven-point scale.

For animal advocates, this study shows the importance of tailoring messages to specific audiences for maximum impact, considering message framing, point of reference, and the audience’s past experiences with and pre-existing feelings about an issue. For coyote advocates specifically, the study provides an outline of the kinds of messages that are potentially the most effective, depending on whom they are targeting. 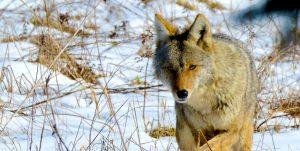 Our Faunalytics Index for March 2018 looks at veterinarians and mental health, public opinions on animal farming and veg*nism, green tourism, sheltering and adoptions, and more.