A study of turtle migration patterns shows a network of smaller Marine Protected Areas (MPAs) in conjunction with bigger MPAs can achieve better results.
ABSTRACT ONLY Only an abstract of this article is available.
PEER REVIEWED This article has been peer reviewed.
Summary By: Faunalytics | This is a summary of an external study | Published: January 23, 2017
Photo by Flickr user trodel 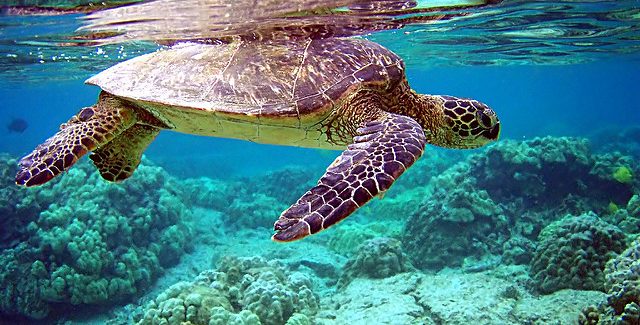 Over the past decade, governments around the world have set up marine protected areas (MPAs) aimed at reducing the decline in ocean biodiversity through restricting human activities such as fishing, poaching, mining for oil, and tourism. While governments are creating larger and larger MPAs, the effectiveness of MPAs in protecting threatened species, particularly migratory species, has been widely debated.

This paper, published in Conservation Biology, reports on the first satellite tracking of a migratory species, the green turtle, in the world’s largest MPA—the 640,000-square-kilometer Chagos Archipelago in the Indian Ocean. The authors attached satellite tags to eight female nesting turtles on the island of Diego Garcia in the Chagos MPA and tracked their movements from October 2012 to August 2013. They analyzed data to determine where and how far the turtles had travelled during their migration from nesting to foraging grounds and how long the turtles had stayed in each location.

The results showed that the turtles remained in the Chagos MPA during their breeding season, which lasted approximately 75 days, but that seven of the eight turtles migrated to distant foraging grounds outside of the Chagos MPA after the breeding season. The turtles took diverse routes to foraging grounds. One turtle travelled 3,979 kilometers to the coast of Somalia in east Africa—the longest green sea turtle migration ever recorded. Additionally, calculations based on 3- and 5-year breeding cycles indicated that the turtles only spend between 5 and 8.3% of their time in the MPA.

The authors conclude that their findings “emphasize the value of the full protection sea turtles receive within the Chagos MPA” during their breeding season. They speculate that the turtles may travel to widely varying locations to forage based on where they had been carried by ocean currents as juveniles. And they recommend that the large MPA be supplemented by a network of targeted smaller MPAs to protect turtles during their foraging season. They note that such a network “reiterates the need for international cooperation to protect migratory species.”

They highlight one such effort, the Memorandum of Understanding on the Conservation of Management of Marine Turtles and their Habitats in the Indian Ocean and South-East Asia (IOSEA0 Marine Turtle MoU). This agreement intends to establish a network of important sites for marine turtles in the IOSEA region including nesting beaches, foraging grounds, and migratory corridors.

For conservation advocates, the paper provides empirical evidence for the effectiveness of a large MPA in protecting migratory animals during their breeding season and for the need to take further steps to protect animals during their foraging season. It also underscores the importance of international collaboration for protecting threatened species and suggests potential directions for future research, including the use of satellite tracking to monitor turtle population numbers and migratory patterns.