This study takes a global look at sea turtle nesting sites and compares them to maps of protected areas to determine gaps in coverage. Paying special attention to developing countries, or countries in active geopolitical conflict, the study gives a view of sea turtle protection that reaches beyond simply identifying gaps, to better understand why those gaps might exist. The results of the study show that many countries protect only a fraction of their nesting sites, and that more regional and international support is needed to help protect sea turtles in developing countries or those engaged in active conflict.
ABSTRACT ONLY Only an abstract of this article is available.
PEER REVIEWED This article has been peer reviewed.
Summary By: Faunalytics | This is a summary of an external study | Published: January 15, 2015
Image by Flickr user Organization for Tropical Studies, under Creative Commons License 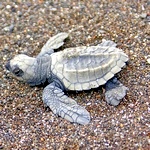 This study takes a global look at sea turtle nesting sites and compares them to maps of protected areas to determine gaps in coverage. Paying special attention to developing countries, or countries in active geopolitical conflict, the study gives a view of sea turtle protection that reaches beyond simply identifying gaps, to better understand why those gaps might exist. The results of the study show that many countries protect only a fraction of their nesting sites, and that more regional and international support is needed to help protect sea turtles in developing countries or those engaged in active conflict.

Protecting threatened species is a difficult task, and gap analysis is one way of “providing an effective means of identifying unprotected areas of high biodiversity value.” However, in addition to understanding which specific areas might have the most value in terms of biodiversity, researchers note that it is important to understand the economic and geopolitical situation in a given country: “Such information could contribute towards identifying specific conservation needs at social, economic, political and ecological levels to maximise the conservation coverage of threatened wildlife.” All seven species of sea turtle – loggerhead, green, hawksbill, Kemp’s ridley, olive ridley, flatback, and leatherback – are included in this analysis. As they aggregate to breed and nest on the beaches of countries spanning both tropical and temperate regions, this type of expanded analysis is especially useful. Many countries that are host to sea turtle nesting sites are also developing or engaged in active conflict. In this study, researchers “analysed a total of 2991 georeferenced records of nesting sites used by all seven sea turtle species in 130 countries (or 4402 nesting sites per species, because the nesting sites of several species overlap),” and then “analysed the data with respect to (1) tropical, sub-tropical and temperate status, (2) the economic status of the countries, including GDP (3) the presence of existing crises (e.g. civil unrest, wars or natural catastrophes), (4) the regional-level, and (5) sea turtle regional management units.”

Among their findings, researchers found that about 87% of nesting sites were located in tropical areas, and mainly hosted by developing countries. Countries with developed economies hosted 532 nesting sites (only 18% of all nesting sites) and of those, 38% were part of protected areas (PAs). Reflecting on these and other results, the researchers note that “the existing PA network is inadequate for sea turtle nesting sites at a global scale. […] PA networks represent an important tool for protecting species; therefore, they should be representative, with conservation targets being set accordingly. Yet, tropical and developing nations have been shown to have lower capacities to implement protective legislation compared to wealthy countries.” Indeed money is a crucial factor in the conservation equation, and “the political, economic and social status (i.e. level of crises) of developing countries might impede, even, minimal increases in percentage PA coverage. Unstable social structures are typically associated with environmental degradation and detrimental effects on wildlife and wildlife habitats (Dudley et al., 2002).” In other words, when the day-to-day survival of people is a struggle, conservation often takes a backseat to human concerns. Moreover, the authors note that “many developing countries still rely on sea turtles for cultural or economic purposes, such as consuming the meat and eggs, and selling them for income,” which adds a further barrier towards their protection.

The authors note that studies like this one are a “first step” towards determining specific countries and regions that need support to make and meet higher conservation goals. In a situation where “only a quarter of sea turtle nesting sites globally are currently encompassed within PAs,” it is clear that a greater global effort is needed to ensure that human conflicts don’t impede the survival of other species, especially threatened ones. The authors conclude that their study “provides baseline information about the vulnerability of the nesting populations on which future explicit conservation targets for sea turtles could be developed.”

Original Abstract:
Although the number and extent of protected areas (PAs) are continuously increasing, their coverage of global biodiversity, as well as criteria and targets that underline their selection, warrants scrutiny. As a case study, we use a global dataset of sea turtle nesting sites (n = 2991) to determine the extent to which the existing global PA network encompasses nesting habitats (beaches) that are vital for the persistence of the seven sea turtle species. The majority of nesting sites (87%) are in the tropics, and are mainly hosted by developing countries. Developing countries contain 82% nesting sites, which provide lower protection coverage compared to developed countries. PAs encompass 25% of all nesting sites, of which 78% are in marine PAs. At present, most nesting sites in PAs with IUCN ratification receive high protection. We identified the countries that provide the highest and lowest nesting site protection coverage, and detected gaps in species-level protection effort within countries. No clear trend in protection coverage was found in relation to gross domestic product, the Global Peace Index or sea turtle regional management units; however, countries in crisis (civil unrest, war or natural catastrophes) provided slightly higher protection coverage of all countries. We conclude that global sea turtle resilience against threats spanning temperate to tropical regions require representative PA coverage at the species level within countries. This work is anticipated to function as a first step towards identifying specific countries or regions that should receive higher conservation interest by national and international bodies.

Our Faunalytics Index for October 2018 looks at koala conservation, shelter dogs, the use of animals in science, the opinions of Brazilians on animal sentience and much more.