Sea level rises and increased intensity of storms and hurricanes could significantly increase beach inundation and erosion, affecting leatherback nesting.
ABSTRACT ONLY Only an abstract of this article is available.
PEER REVIEWED This article has been peer reviewed.
Summary By: Faunalytics | This is a summary of an external study | Published: March 2, 2017
Photo by Flickr user rustinpc 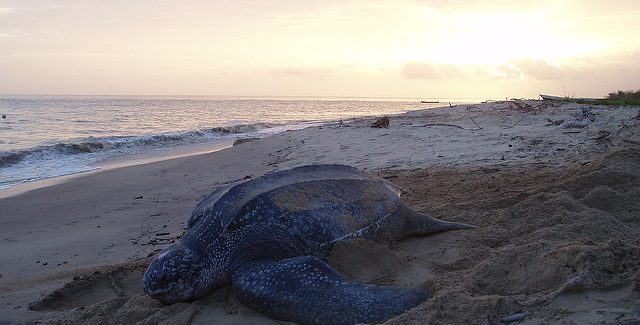 The leatherback turtle, listed as “vulnerable” by the World Conservation Union, faces many threats, including being caught and killed as fishing bycatch, habitat destruction due to coastal development, and direct poaching of eggs from nesting beaches. They are also increasingly threatened by rising sea levels caused by global warming, which leads to flooding and erosion of nesting beaches and can also cause increased moisture levels in sand that may negatively impact nest survival. This paper, published in the Journal of Experimental Marine Biology and Ecology, investigates the threats posed by increased moisture by evaluating how sand water content effects embryonic development and hatching success of leatherback sea turtle nests.

The authors conducted the study in three parts: a field study that evaluated sand water content and hatching success in situ at Playona Beach, Colombia, which hosts the fourth largest leatherback turtle nesting rookery in the world; a field study that investigated the same factors in hatchery conditions at an open beach hatchery created by the authors; and an experiment in which eggs were collected and incubated in sand-filled containers in a lab with treatments of 1%, 2%, 6%, 10%, and 12% sand water content.

The authors conclude that their study “suggests that increased water content in nests may have negative effects and could extend to significant nest mortality and thus reproductive loss for some populations.” They state specifically that “successful development and hatching is severely impacted at sand water contents higher than 10%.” As to why increased water negatively impacts nests, they note that oxygen is approximately 200 times less soluble in water than in air and increased moisture may thus limit oxygen supply to developing embryos, and that moisture conditions may lead to increased disease development.

For advocates and policy makers, the paper provides additional evidence of the potential negative impacts of climate change on the already vulnerable leatherback sea turtle. The authors recommend further research to explore exactly how increased sand water content affects nests and investigate the same factors for other locations and species of marine turtles. Finally, advocates may be interested in information the authors provide about the likelihood of various adaption scenarios of turtles to climate change, including the most likely scenario of having to vary placement of nests and nesting sites.

The ocean environment where manatees live near Brazil holds a significant amount of garbage, which may hinder the success of manatee conservation. 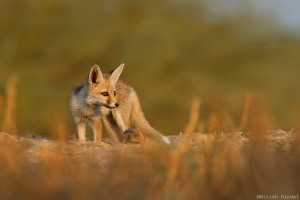 Should Humans Intervene in Nature to Stop Wild Animal Suffering?

Should we intervene in nature to reduce the tremendous amount of suffering endured by wild animals?