One Strategy For Preventing Turtle Bycatch

By identifying the areas and seasons at highest risk of bycatch, the interaction index has the potential to make a big difference for turtles.
ABSTRACT ONLY Only an abstract of this article is available.
PEER REVIEWED This article has been peer reviewed.
Summary By: Mona Zahir | This is a summary of an external study | Published: May 11, 2017
Photo by Flickr user KevinStolzenbach 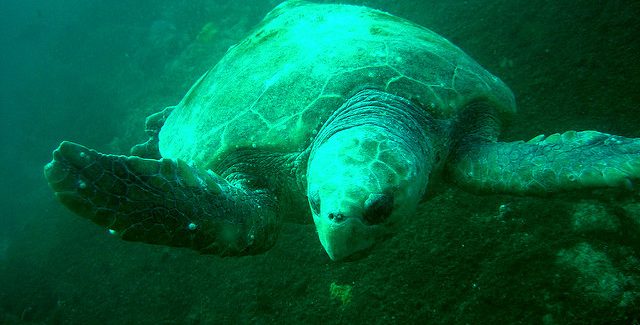 Loggerhead turtles are an endangered species whose population in the Mediterranean has been declining. These turtles are often accidentally caught by fishers as bycatch. With more than 100,000 Mediterranean loggerhead turtles caught each year and 10-50% of these turtles dying, loggerhead turtle bycatch is a serious problem. This study maps out high-risk times and areas for bycatch by tracking turtle movements as well as the movements of bottom trawls (a type of fishing gear responsible for a great deal of sea turtle bycatch). Such data will hopefully lead to more effective conservation strategies.

From 2006-2012, the movements of seven rehabilitated turtles from a rescue center were tracked after release through satellite transmitters. This data was combined with data from vessel monitoring systems that track the movement of Italian bottom trawls. Italian bottom trawls make up about half of trawlers in the area being studied, and data about their movements is readily available from the Italian Ministry for Agricultural, Food, and Forestry Policies. A model was developed to predict areas with the greatest risk of turtle-trawler interactions.

Though trawler data was not available for nearby areas unoccupied by the Italian bottom trawls, the authors were able to make inferences of bycatch risk based on other information. For example, they predict a high risk of bycatch in the northern Adriatic, which is under Croatian control. Additionally, they predict that the large number of islands on the eastern coast attract fishers using other gears dangerous to turtles (such as passive nets and longlines) which also lead to significant risks of bycatch.

Looking forward, the authors note that Slovenia and Croatia will soon be required by law to use vessel monitoring systems that report movement of their trawlers. This will allow future studies to further chart out turtle-trawler interaction risks in the Adriatic. The methods used in this study can be applied to study bycatch risk in other areas in the world as well. The authors conclude by suggesting that “A combination of turtle and trawler satellite data, bycatch information, and environmental parameters, together with gear modifications . . . may contribute to more effective management of fisheries and to the conservation of endangered species.” Conservation advocates can use data from this study to identify high-risk areas on which to focus their efforts.