Just one class period on the ethics of eating animals can influence student attitudes and eating behaviors to shift away from meat consumption.
FULL TEXT The full text of this article is available.
PEER REVIEWED This article has been peer reviewed.
EXTERNAL STUDY This is a summary of an external study.
Summary By: Mian Osumi | Original Study By: Schwitzgebel, E., Cokelet, B., & Singer, P. (2021) | Published: January 31, 2022
Photo by Philippe Bout on Unsplash

If college is becoming just another hoop to jump through, and schoolwork another chore, how much can classroom learning actually impact students in the grand ways that college mission statements promise? In this study, we can get a glimpse of how this applies to the animal advocacy movement, and the results were surprisingly optimistic: after learning about meat ethics in their philosophy class, students had a more negative impression of factory farming, pledged to eat more plant-based, and their dining hall purchases showed that they also followed through with action.

The content of the instruction for the 730 students in the study was:

Students were also given the opportunity to anonymously pledge to avoid factory-farmed meat for 24 hours following the class. 39% of students took this pledge, and 85% of those students that pledged later self-reported that they followed that pledge. The percentage of students in a given section that would take the pledge greatly varied from class to class, ranging from no students to 81% of the students. TAs reported social pressure to be a likely factor of this variability. This stresses the importance of showing plant-based eating as a growing trend that many people are participating in.

The study also tracked (with anonymous tags, to protect student identity) students’ purchases to study actual behavior. Although the data was limited to the 113 students who used their student cards in the dining halls, the data that existed showed a marked decrease in students’ purchases containing meat after the class, from 29.7% to 23% (-6.7%) of overall purchases. The change was more pronounced when only looking at purchases that were $4.99 or more, i.e. purchases more likely to be entrees, dropping from 50.7% to 41.8% (-8.9%).

Purchase behavior was also the only outcome where there were substantial differences between students who had watched the factory farm video and those who didn’t. There was no significant difference between the two groups for answers to the questionnaire, and for the pledges, the non-video group even had slightly higher pledges than the video group. However, when it came to what students bought, the video-watching group’s percentage of purchases with meat dropped 29.6% to 20.9% (-9%), while those in the non-video group’s purchases with meat dropped from 29.8% to 25.1% (-4.7%). This represents a difference of 190% for the video group. This difference was also more pronounced when only looking at purchases over $4.99, with the difference before and after the lesson being 459% higher for the video group.

This could suggest that watching factory farm footage has more of an unconscious effect on people, where they don’t overtly change their opinion or give a vegetarian pledge, but in practice, they will eat less meat. Screening such footage is a controversial topic with many non-vegans protesting its use, but this study suggests that with the viewer’s consent, these videos can have an impact on people’s behavior.

This study also examined whether it mattered if the TA teaching the class was vegetarian or not, but no strong trend emerged for this unless the person revealed whether they were vegetarian. More importantly, those who didn’t reveal their vegetarian status, whether they were vegetarian (40% pledge rate) or not (37% pledge rate), garnered more pledges than those who did reveal their status, both vegetarians (31% pledge rate) and not (20% pledge rate). There was no statistically significant difference in purchase results. This would suggest that people find it easier to change their opinions when they feel the messenger doesn’t have a stake in the argument.

One on hand, this study confirms the difficulty of changing behavior: only 34% of students responded to the second questionnaire that they would avoid eating factory-farmed meat, and still 32% of this group’s $4.99+ purchases contained dining hall meat. However, on the other hand, for non-pledgers, that percentage was 47%, and for the average student who wasn’t in the class, that percentage was 53%. If even this modest decrease in consumption was replicated in all of the approximately 20 million college students in the U.S., it could save the lives of hundreds of millions of animals per year.

Therefore, even these small individual changes would create a huge impact for the animals. It is, in some ways, very promising that just a ten-page reading and 55-minute class could change students’ behavior for weeks afterward. It’s especially surprising that such a basic course could change these college students in southern California, who would likely already have been exposed to veganism and therefore have a somewhat set opinion on the matter.

Seeing this data confirms the importance of campus veg advocacy, and suggests campus advocacy can extend beyond improving veg options, to include campaigns to increase animal ethics courses or have animal studies as a major. For those interested in starting campus animal activism, or who would like to bring their current activism to the next level, check out The Humane League’s Student Alliance for the Animals.

Some researchers believe that behavior change starts with knowledge. A recent study tests this idea using the film Cowspiracy as a case study. 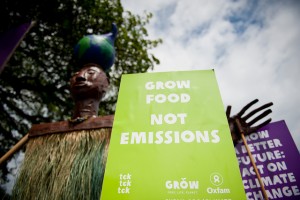