The Meat Paradox: Wanting To Eat Meat Without Killing Animals

There are some interesting cultural differences in how people experience cognitive dissonance and eating animals.
ABSTRACT ONLY Only an abstract of this article is available.
Summary By: karol orzechowski | This is a summary of an external study | Published: January 23, 2016
Photo by Flickr user James 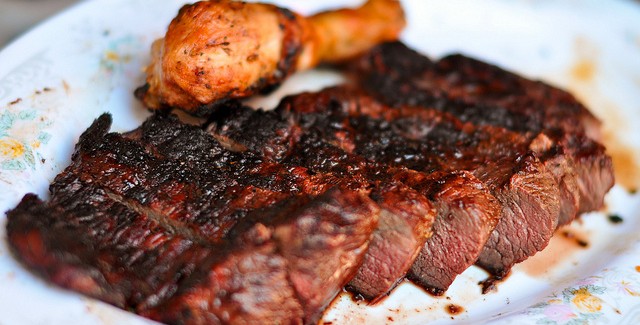 The “meat paradox” is the phenomenon that many people enjoy eating meat but do not have any interest in — and may even be repulsed by — killing animals. Trying to reconcile those two perspectives can often result in cognitive dissonance and psychological discomfort for people who see themselves as caring about animals but still wanting to eat them. There are many different ways that people “cope” with the discomfort, such as distancing oneself from the killing of animals or through the “denial of mind” that happens when people refuse to accept that farmed animals have “human-like mental states.” Another coping strategy may be to become vegetarian (or vegan); unfortunately, this strategy is employed less frequently than others.

Not all cultures view meat consumption the same way and it’s possible that they experience the meat paradox in different ways as well. Although meat consumption is prominent in diets across the globe, there are many cultural differences in how much people eat, what species they consume, and so on. This study’s aim was to understand how people in two very different countries — China and France — experience the meat paradox. Meat is central to French cuisine and is also playing an increasing role in Chinese cuisine. Meat consumption in China has doubled in the last 20 years and in 2011 meat consumption per capita was at 57kg while in France the per capita consumption was 89kg. The authors looked at two stages of the meat paradox, separated into production and consumption. Because other studies have claimed that “westerners are more likely to experience cognitive dissonance than easterners,” the current researchers hypothesized that “the French, who generally belong to a western culture, should experience more cognitive dissonance due to the meat paradox than the Chinese.”

The study’s authors conducted two surveys, one each to examine production and the consumption sides of the meat paradox. They presented research materials in different orders to test how varying forms of “dissonance reduction” could be used effectively. In the first study (about production), the researchers found that respondents from both cultures reduced their willingness to eat beef when shown the production processes, but the French participants tended to also “reduced their mind attribution to cows when the animal origin of meat was explicitly shown.” In the second study (about consumption), research indicated that participants who were shown a recipe with an animal image led them to “like a dish less, compared with the recipe with dish image and recipe alone.” In study two, there was no significant difference between cultures.

The researchers note that appetite plays an important role, especially in the consumption stage, and that “while reminders of the origin of meat in a live animal may activate cognitive dissonance, other processes, such as activating thoughts about the deliciousness of meat, may also be involved.” Information that presents “relatively salient reminders” of the slaughter process “have the strength to overcome the thoughts of deliciousness of meat.” As for the more nuanced cultural differences, the authors speculate that “in China, especially in rural areas, killing food animals is not as industrialized as in France, and people have more opportunity to witness the killing process.” They note that Chinese people may be more familiar with animal slaughter, which may explain why French people were more affected by that particular imagery.

For animal advocates, the research shows that cognitive dissonance in response to the meat paradox is a general condition across cultures. Figuring out how to get people to cope with that dissonance by changing their behaviour instead of denying animal sentience is a key challenge for animal advocacy.