The latest edition of Business Benchmark on Farm Animal Welfare (BBFAW) reports on the farmed animal welfare practices and performance of 150 global food companies for 2020.
FULL TEXT The full text of this article is available.
EXTERNAL STUDY This is a summary of an external study.
Summary By: Susan Gabriel | Original Study By: Amos, N., Sullivan, R., & Williams, N.R. (2021) | Published: July 19, 2022
Photo by Kenneth Schipper Vera on Unsplash

Increasingly, consumers and investors are calling for transparency in the way farmed animals are treated by food organizations and their suppliers. The Business Benchmark on Farm Animal Welfare (BBFAW) provides a robust assessment of company practice and reporting on farmed animal welfare for 150 of the world’s largest food companies, spanning 23 countries, and three food industry sub-sectors.

In 2020, companies continued to make progress overall, indicating that farmed animal welfare remains on the business agenda. Twenty-three companies moved up at least one tier, and the average animal welfare score across companies increased from 34% (2019) to 35%. For the first time, ‘food producers & manufacturers’ was the highest performing sub-sector with an average score of 38% (up from 35% in 2019), versus 36% (‘food retailers & wholesalers’) and 31% (‘restaurants & bars’). Across regions, Latin America and Asia Pacific both received notably higher average scores in 2020 compared to 2019, increasing from 29% to 40%, and 21% to 27%, respectively. There’s also been an increase in employee-based actions, with nearly half (49%) of companies now providing employee training on animal welfare and 55% sharing actions taken in the event that their animal welfare policies aren’t followed (up from 42% in 2019). Thirty-one percent of companies reported on the proportion of stun-slaughtered animals (including fin fishes) in their global supply chains, while more than half (54%) reported including farmed animal welfare in supplier contracts.

While these results are encouraging, animal welfare issues remain significantly underreported. Although 79% of companies now published the objectives of their animal welfare commitments, it wasn’t always clear how these commitments translated into improvements. Furthermore, not all welfare issues were disclosed.  For example, while 61% of companies reported the proportion of cage-free laying hens in their supply chains, fewer reported on issues such as beak trimming and dairy cow tail docking. In fact, the average score for ‘Performance Reporting and Impact’ remained very low for 2020, at 14% (11% in 2019).

Overall, the results are a mixed bag. While it’s promising that many companies continue to recognize the need for farmed animal welfare, there is still work to be done. Importantly, the perception of farmed animal welfare has changed dramatically among investors, from a niche issue to one with widespread awareness. Today, many investors want evidence showing that companies’ management processes are having a positive impact on farmed animal welfare in practice. This report serves as an authoritative source of evidence for investors and consumers alike, who are looking to make more conscientious choices both in the food products they purchase, and the companies they invest in. From an advocacy perspective, reports like this hold businesses accountable and remind them that animal advocates will make sure they follow through with their welfare commitments. 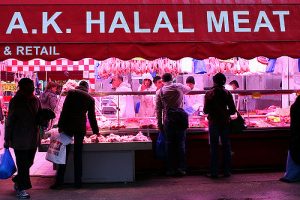 Worker screening, education, and empathy training may be key factors in improving welfare in the halal meat supply chain.