Shelter workers located in areas with breed specific legislation (BSL) can play a major role in the survival and adoption of pit bull type dogs.
FULL TEXT The full text of this article is available.
PEER REVIEWED This article has been peer reviewed.
Summary By: karol orzechowski | This is a summary of an external study | Published: September 27, 2015
Photo by Flickr user denial_land 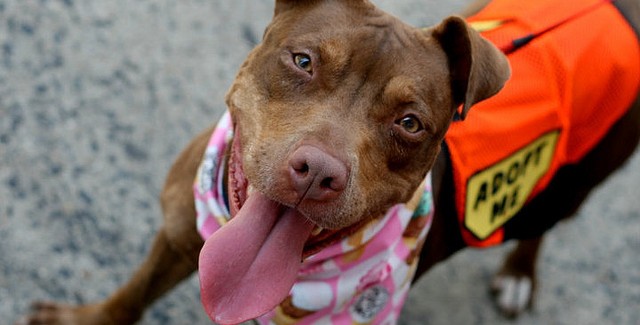 Pit bull terriers and pit bull-types are much maligned in various countries across Europe and North America, because some people consider these dogs to be more dangerous and prone to harming humans than other breeds. Due to this, many countries or states include pit bulls and certain other dogs in so-called “breed-specific legislation” (BSL) which prohibits or restricts keeping such dogs as companion animals. Often, officers from SPCAs and the police are expected to enforce these bans, and the breed of the dogs are usually assessed by a vet or similar professional following a report from a member of the public.

Identifying dog breeds without genetic testing is not an exact science, and many dogs that look like pit bulls aren’t. This is further complicated by the fact that, in some regions, the breed name “pit bull” is a grouping of several different breeds that share a similar size and look. For example, the U.K. Kennel Club does not even recognize pit bulls as a breed, and as such only has a set of criteria that may identify dogs that are a “pit bull type.” This dynamic makes some veterinary offices a key battleground for pit bull identification – a place where the lives of pit bull types hang in the balance. Pit bulls in shelters generally face higher rates of euthanasia, based on a perception of them as dangerous and unadoptable dogs, and in places with BSL, they may be confiscated from their human companions and euthanized without recourse.

This study looked at the perceptions of shelter staff, and examined the processes and mechanisms they use to identify pit bulls in their center. Nearly 500 respondents in the U.S. and U.K. were surveyed, and were given a series of open ended questions about pit bulls. They were then shown various pictures of dogs and were asked to state whether they would describe each as a “pit bull.” In addition, they were told to assume that each dog pictured didn’t have a caregiver or behavioral problems, and were asked to state what their shelter would most likely do with the dog. The options they could choose between included the dog being made available for adoption, transfering the dog to another organization, or euthanizing the dog.

The survey found that there was a marked “lack of consensus,” both within the U.S. and between the U.S. and U.K., about what constitutes a pit bull dog. Respondents in the U.S. tended to have a broader definition than their U.K. counterparts, an effect that may be due to differences in legislation between the two countries. BSL legislation in the U.S. varies between regions, while in the U.K. it is standardized countrywide. Interestingly, the survey found that, even though the laws in the U.K. do not allow transfer of ownership with BSL breeds, respondents stated most often that the animals in the pictures would be put up for adoption. This could be due to shelter workers misunderstanding the law, or because they would rather misidentify the breed and have the dog adopted, than have it euthanized.

For advocates, this study shows the important role that animal workers have when they operate in areas with BSL. The researchers note that “given the discrepancies both within and between countries regarding how shelter workers assign breeds to dogs, particularly among the bull breeds, it is important to recognize the impact that labeling a dog a pit bull may have.” It is understandable why some shelter staff may be deliberately misidentifying dogs’ breeds to protect them from BSL – accurately (or inaccurately) identifying their breed is a matter of life or death. It is also logical that the reverse may also occur in some instances where dogs are accidentally labeled as pit bulls, making them victims of BSL, and possibly resulting in their euthanasia. This study shows that the operation of BSL is an imprecise and ineffective policy.