Identifying pit bulls is very subjective but has high stakes for dogs. This study looked at just how subjective it can be for animal shelter workers.
FULL TEXT The full text of this article is available.
PEER REVIEWED This article has been peer reviewed.
Summary By: Mona Zahir | This is a summary of an external study | Published: January 6, 2017
Photo by Flickr user Patti Gilliam 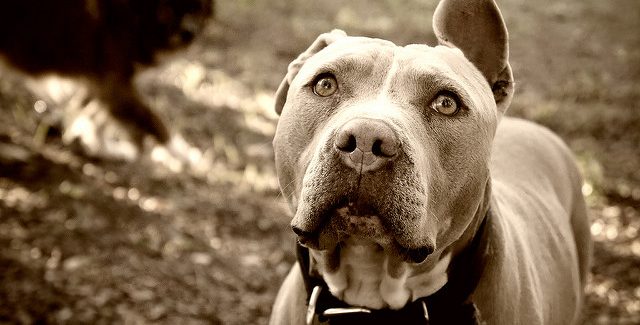 Shelter staff commonly identify the breed of the dogs they receive based solely on appearances. However, the accuracy and consistency of these judgments are rarely evaluated. Inaccurate designations affect how people perceive dogs because some breeds are perceived to be more dangerous than others. One persistent public perception is that pit bulls are especially dangerous. “Pit bulls” include dogs of multiple related breeds and their mixes rather than a single recognized breed, yet this label is used loosely in various contexts. Importantly, breed designations and associated perceptions affect how dogs are treated by homeowners associations, insurance companies, and others when formulating policies.

This article, published in The Veterinary Journal, describes a study that tested how well 16 different shelter workers (four of whom were veterinarians) were able to identify 30 different dogs based on appearance alone. Their designations were divided by researchers into two categories: pit bull-type and not pit-bull type. These designations were compared for consistency between workers as well as for accuracy using DNA tests.

The researchers found that consistency of choosing the same designation (pit bull-type or not pit bull-type) for the same dog was moderate at best among workers of the same shelter. Additionally, the level of agreement between the designations chosen and the actual DNA test results ranged from poor to moderate. These results indicate that having shelter staff identify pit bull-type dogs based on appearance may often lead to designations that are neither consistent nor accurate. Interestingly, the shelter veterinarians were not found to be more accurate than other shelter staff in assigning correct breeds.

Previous studies on this topic have found similar results, with low accuracy and consistency when asking participants to identify dog breeds based on appearance. Additionally, recent studies have found that there is not necessarily a correlation between an individual dog’s breed and his or her level of aggression. Since identifying dogs breeds based on appearance often leads to mistakes, and because a dog’s breed does not necessarily make him/her more or less dangerous, the authors suggest that regulations restricting and banning certain dog breeds are unfounded.

The authors instead suggest preventing dog attacks by focusing on supervising children, paying attention to dogs’ body language cues, neutering dogs, and other such measures. Advocates can help reduce discrimination against dogs by speaking to policymakers and educating the public about how dog breeds are often wrongly identified and wrongly stereotyped.

The most successful states and localities don't simply require owners to sterilize and license their companions - they provided the resources and services for them to do so easily.