Pets As Gifts: Just Do The Math

There is just no data to support that we should be denying the adoption of a dog or cat to a person who wants to gift a pet to a loved one.
Author: Faunalytics | Published: December 15, 2015
Photo by Flickr user nicktakespics 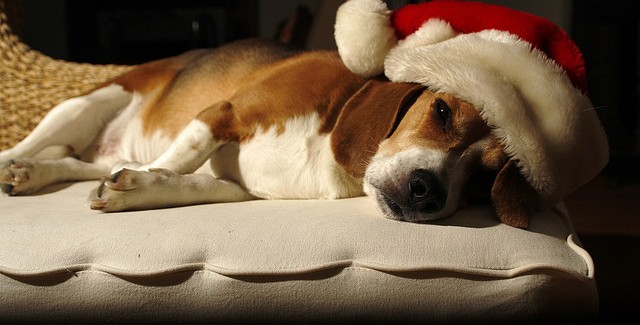 This article by Dr. Emily Weiss is being reposted, with permission, from the ASPCA Professional blog. You can also read more from our library about giving companion animals as gifts and adoption retention.

There is just no data to support that we should be denying the adoption of a dog or cat to a person who wants to gift a pet to a loved one. Dr. Emily Weiss is back again this season to bust that old myth.

So, last week on the ASPCApro Facebook page, there was a passionate dialogue about adopted pets as gifts. There were those in support, and several who used words like “bad idea,” “foolish,” etc. And then there were a few folks who stated that their shelters received tons of calls after the holidays from those looking to get rid of the pet they received as a gift.

A couple of years ago we published a small survey study exploring the impact on retention and perceived attachment when obtaining a pet as a gift. There was already a fair amount of peer-reviewed research pointing to pets obtained as gifts being no more likely to be relinquished – or in some cases, less likely to be relinquished than pets obtained other ways. But as most shelters were still not allowing pets to be adopted as gifts for others, we wanted to further explore the relationship.

We found that the majority of people who obtained a pet as a gift thought receiving the pet as a gift increased their level of attachment, and only 3% said it decreased it. The percentage of pets obtained as gifts still in the home is the same as, or lower than, the percentage reported for general pet retention.

There really is just no data to support that we should be denying the adoption of a dog or cat to person one who wants to gift a pet to a loved one. The earlier data could even be loosely interpreted that the better adoption option would be to adopt pets as gifts more readily than to adopt pets for an individual! In fact, this points to an important point in how we interpret risk. Look – most dogs and cats stay in their homes. Studies repeatedly tend to find a retention rate for keeping a pet for life somewhere around 85% ish.

So this means that for every 100 adoptions you do, you should count on about 15 of those animals being re-homed in the course of their lives. Yep. Now that should not stop us from doing adoptions. Instead, we should celebrate it – most dogs and cats stay home. And the better news is we are actively working on ways to increase that retention for those who want to keep their pets.

Now, going back to the couple of folks who commented on that Facebook post that they received lots of calls after the holidays… We suspect that the holiday season is a time in which there is a higher than average acquisition of new pets, be they obtained as a gift or for oneself. If that is true, one would expect that shelter may receive more calls after the holidays – not because pets given as gifts are more at risk, but because there are more new pets in general! I have to mention there were also those on that Facebook post who reported things such as, “I can only speak for my own experience. At our large open admission shelter, which I’ve been at for more than a dozen years, we have never, ever seen this to be a problem. So the answer from here is – yes, I know how many Christmas present pets are turned in to shelters after New Year’s – none here.”

I had the honor a couple of weeks ago to give the keynote at the Carolinas Unite conference and shared some of the data on pets as gifts. There were several organizations in the room that had embraced the idea and were among the shelters who were conducting pet deliveries on Christmas day. It was really great to see what happens when an old myth is busted and the lives that have been saved as a result. I collapse in tears as I watch this YouTube video of the human animal as he/she obtains a new pet as a gift. Let’s continue down this path and get more animals home where they belong.