The relationship between tigers and humans in Bangladesh is a complex web of conservation, carnivore predation, and other factors.
ABSTRACT ONLY Only an abstract of this article is available.
PEER REVIEWED This article has been peer reviewed.
Summary By: Faunalytics | This is a summary of an external study | Published: May 18, 2016
Photo by Flickr user guppiecat 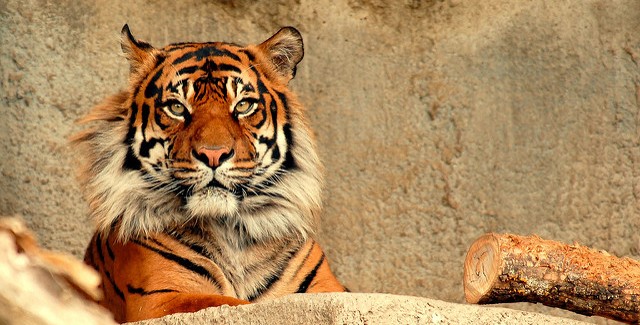 In recent years, a growing number of animal species is showing signs of population decline. The trend is shining a spotlight on the potentially dire effects of human behavior including illegal hunting as well as climate change caused by humans. In particular, large carnivores are currently in decline, with 61% of large carnivore species around the world now threatened with extinction. The decline of large carnivores is especially important for ecosystem health because these animals support the overall functioning and resilience of their surroundings. However, understanding why humans kill large carnivores such as tigers is not always straightforward. Emerging science around human-carnivore conflicts has found that carnivore deaths may be motivated by (and socially accepted because of) everything from “traditional hunting practices, religion, and informal institutions, such as taboos.”

This study looked at “individuals’ motivations for, and the social acceptability of, tiger killing in villages bordering the Sundarbans mangrove forest, Bangladesh.” What little information exists shows that the killing is “driven by multiple factors and not simply a desire for retaliation following a tiger attack on a person or livestock.” Through dozens of qualitative interviews with local villagers, as well as a quantitative survey, the researchers found nearly all of the respondents had had direct contact or experience with wild tigers entering their villages. Moreover, the “worry and fear of harm by tigers, a perceived lack of support from local authorities, retaliation, and personal and social benefits motivate people to kill tigers.” These incidents sound horrific, with hundreds or even thousands of villagers surrounding the animals. However, importantly, respondents were “less accepting of killing a tiger which had attacked a person in the forest than of killing a tiger which had attacked a person in a village.”

The study shows that motivations for killing tigers – and the community’s acceptance of that killing – is somewhat fluid and context-specific. For wildlife advocates, the researchers provide a range of recommendations, such as addressing fears about tiger attacks on people and farm animals during village tiger incidents, building capacity to respond to tiger incidents with non-lethal means, addressing crowd formation behavior, and helping the community to simply “develop the desire to respond by non-lethal means.”