The problems in the declining horseracing industry are numerous and deep, and their exposure is due in large part to animal advocates.
FULL TEXT The full text of this article is available.
PEER REVIEWED This article has been peer reviewed.
Summary By: karol orzechowski | This is a summary of an external study | Published: November 14, 2015
Photo by Flickr user w4nd3rl0st 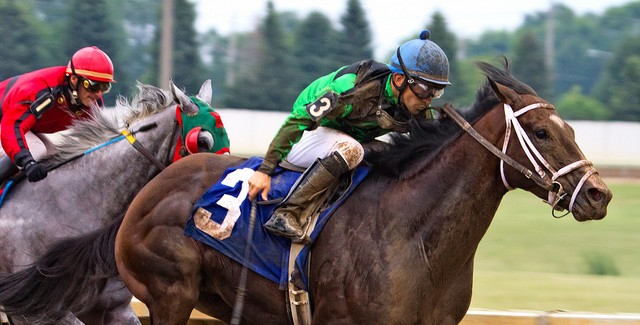 According to a study from the U.S. Jockey Club, thoroughbred horseracing is decreasing in popularity, and its core fan base is shrinking. The decline of the industry in the U.S. is “echoed in other important racing nations,” such as Australia, Ireland, the U.K., Japan, and Germany. This downturn has the industry talking about “sustainability,” but the problem is deep and very much tied to “a strong negative public perception.” Studies find that only 22% of the general public has a positive impression of the sport, and only 46% of current fans – a fan being someone who attends three or more events per year – would recommend that their friends follow it. Animal welfare concerns are growing across many countries and, as the author of this paper notes, sweeping aside “the dark side” of horseracing is no longer possible.

This study examines the “sustainability” of thoroughbred horseracing, analyzing the sport from a variety of angles to provide a holistic view of the problems it faces, and assesses possible solutions. The paper serves as a larger critique of the concept of sustainability itself, and shows that in some ways horseracing is inherently unsustainable because there are limits to how much racing could grow without deepening the problems that it already has. The author outlines various ethical and welfare issues in the sport, such as doping, manipulation of mare fertility, and the physical limits of racing which pushes horses to extremes, noting that “structural failures of bones and ligaments frequently are catastrophic for horse and rider.” They state that the industry is operating “with little uniform and independent regulation and oversight, and a lack of transparency. Most insight into welfare and ethical issues in the industry has had to rely to a large part on the work of not-for-profit animal protection organizations.”

The author suggests moving forward by introducing more regulation, oversight, and reform. The article as a whole shows that pressure from animal protection groups has the industry in a corner and that advocates have exerted a great deal of influence.

In this blog and Faunalytics Factsheet, Nick Greenaway outlines the current state of greyhound racing globally, and why it's an industry that we can and should fight to end.