New research shows that when it comes to cost-efficiency, "medium" welfare systems are best, but that may not make them the most humane.
ABSTRACT ONLY Only an abstract of this article is available.
PEER REVIEWED This article has been peer reviewed.
Summary By: Faunalytics | This is a summary of an external study | Published: June 13, 2016
Photo by Flickr user 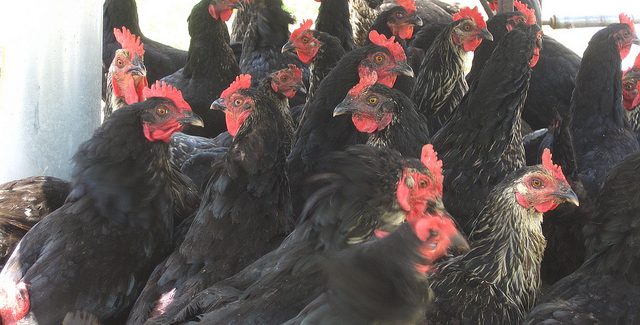 Concern for animal welfare appears to be on the rise and, partly as a result, we’ve seen some modest changes to the way farmed animals are raised and slaughtered. In the European Union (EU), there have been efforts to address consumer concerns with respect to the welfare of “broiler” chickens (used for meat), specifically. This report separates those efforts into three groups: conventional, “middle-market,” and “top market.” Middle-market production exceeds the minimum legal standards, but doesn’t meet organic standards. The “top market” is organic production, where the broiler chickens are raised relatively slowly and kept at a lower stocking density. However, the economics of the industry are restrictive. The researchers note, “the broiler sector is highly cost-price driven,” so the cost of production ostensibly has a big influence on the industry.

This study looked at the implementation of animal welfare measures in the EU, surveying nearly 170 farms across the Netherlands, the UK, and Italy and giving them a welfare score based on criteria from the Welfare Quality® (WQ) program. While middle-market and top market systems exist, conventional systems dominate these countries. In the Netherlands, for example, conventional production accounts for 97% of the industry. For this paper, the researchers had the goal of analyzing “the contribution of different production systems to overall AW (animal welfare)… thereby supporting farmers’ decision making regarding their choice of production system.” They were not analyzing what systems optimize chicken welfare, but rather scoring different systems based on how much they address welfare in the context of varying production costs.

Here’s what they found: Perhaps not surprisingly, conventional systems scored the lowest with a WQ score of 577. The highest score was the middle market system, with a WQ of 736, while extensive outdoor systems were a close second (733) and organic systems falling behind in 3rd place with a WQ of 698. Strictly in terms of production costs, the researchers noted that “conventional systems were produced at the lowest costs, followed by the middle-market, the extensive outdoor, and the organic systems.” Because production costs are so crucial to the industry, and because the cost of converting to a middle-market system is relatively cheap, the study found that it delivered the most value for conventional farms. The middle-market approach also allows farmers to change back to a conventional system at relatively little risk or cost.

It would be understandable for some animal advocates to be discouraged by the results of this study. The conclusions seem to promote a very modest improvement in animal welfare based on a cost-benefit analysis from an industry perspective. But it’s also worth noting that the extensive outdoor system scored only slightly lower than the middle-market approach. While the researchers may be correct that middle-market systems represent a more feasible change for conventional farmers, this is not the whole story. In the end, the consumer chooses. Here the researchers highlight a key problem: “consumers’ unproportionally (sic) low willingness to pay for products that are produced without the provision of free-range is crucial in improving (animal welfare).” Changing consumers’ opinions is one important task for animal advocates.