Letting Chickens Be Chickens: A Review Of Housing Conditions

Battery cages are unsuitable for most of chickens’ natural behaviors, which rely on abundant outdoor space as well as nesting areas and sleeping perches.
ABSTRACT ONLY Only an abstract of this article is available.
PEER REVIEWED This article has been peer reviewed.
Summary By: Owen Rogers | This is a summary of an external study | Published: September 14, 2017
Photo by Flickr user farmsanctuary1

This study from 1978 was conducted in England by Oxford University’s Animal Behavior Research Group. The intent was to determine what enclosure-related factors the chickens themselves preferred. The factors included in the study were cage size and floor type – grass vs wire. This sort of study was intended to look at animal welfare from the animal’s perspective, rather than a human one.

In the study, chickens were found to prioritize larger cages over smaller ones, and grass floors over wire ones. This was probably self-evident, even 40 years ago. When faced with a large wire-floored cage or a small grass-floored one, the chickens’ preference for grass outweighed their preference for a large cage. There was no significant difference in preferences between chickens who were kept in battery cages and those that were kept outside prior to the experiment. Of the 16 birds used, 3 preferred the wire floor to the grass one, 3 preferred a small cage to a large one, and 2 preferred the large wire cage to a small grass one.

However, these chickens that bucked the trend were considerably more hesitant to enter their preferred cages. In addition, chickens who were kept outside prior to the experiment were much quicker in making their choices than chickens who were previously kept in cages. This indicates that the mental well-being of chickens may improve in outdoor spaces as opposed to indoor cages.

More recent research has involved other cage features, like outdoor runs. When provided, chickens take advantage of outdoor runs and generally have improved health and welfare. However, the risks of predation and infectious disease are also greater in outdoor areas, as they are not as easily controllable. The level of use of outdoor runs is also dependent on group size, stimuli features, and cover. Preference testing has also been used to determine hens’ preferences for nesting – smaller areas are preferred, as are certain materials.

Perches are another desired feature for cages, as chickens naturally roost above the ground at night. In addition, chickens are natural foragers, and have not been shown to forgo foraging even when provided with a complete diet. To forage, they need significant outdoor space. This is also useful to facilitate chickens’ natural curious and exploratory nature, which is hampered by a lack of space in traditional batter-cage environments.

Dustbathing, stretching, and wing-flapping are also confined by battery cages, and have been identified as possible sources of pleasure or comfort for the animals. They also lack the ability to exercise, which can be harmful to their muscle and skeletal development. In one study, nearly a quarter of chickens kept in cages were found to have broken bones. In addition, when kept in confined conditions – even without cages – undesired behaviors such as pecking and aggression can arise, as the birds do not have personal space nor any room to escape from an attacker.

Ultimately, battery cages are unsuitable for most of chickens’ natural behaviors, which rely on having a significant amount of outdoor space as well as secluded nesting areas and sleeping perches. 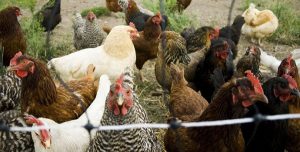 The Unified Field Index envisions a new assessment of animal welfare, and the opportunity for benchmarking, gathering together results across the industry.