Transport times of animals are increasing, and this insider look at the logistics of moving farmed animals shows the industry is trying to adjust, with mixed results.
ABSTRACT ONLY Only an abstract of this article is available.
PEER REVIEWED This article has been peer reviewed.
Summary By: karol orzechowski | This is a summary of an external study | Published: August 22, 2015
Photo by Flickr user ogcodes 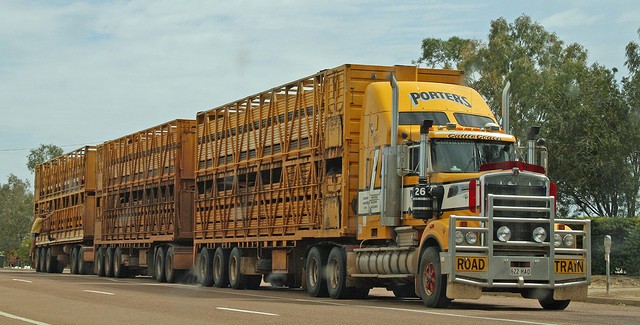 Over the last few years, issues related to the transportation of farmed animals have become the focus of numerous animal advocacy campaigns. For example, Toronto Pig Save looks at transportation conditions of pigs, chickens, and cows in Canada, Animals Australia campaigns against overseas live export, and the Gateway to Hell campaign aims to end the transport of animals around the world by air for use in laboratories. Each campaign is different, yet has been effective in its own way, bringing the issue of animal transportation to the attention of the media and general public.

This article examines the movement of farmed animal from a logistical perspective, and calls this transport “an essential component of the meat industry.” The researchers focus on how to make the transport logistics chain better for the industry’s sake. It is put in the bluntest of terms: “Farmers, hauliers, retailers and other meat chain participants increasingly recognize that consumer concerns for good animal welfare represent a business opportunity that could be profitably incorporated into their commercial strategies.” The authors note that the current trend to intensify farmed animal production is increasing transport time (with the U.S. currently allowing farmed animals to be transported up to 28 consecutive hours), and advocates know that as transport times increase, the welfare of animals decreases. This article should help to renew the commitment of farmed animal advocates towards addressing the issue of animal transport, as they resist moves by the industry to make such transport “friendlier” and more palatable.

The Live Animal Trade In The U.S.: A Review

The live animal trade industry in the U.S. is worth $3.5 billion and more than 100 million animals were ‘traded’ in 2016. In many cases, the U.S. exported the same animals they imported, resulting in unnecessary trade.