Why is knowledge of animal issues important and what are the trends and demographic differences of knowledge by topic?
EXCLUSIVE Exclusive article or blog for Faunalytics.
Author: Che Green | Published: October 5, 2016
Photo by Flickr user bonvoyagetohappy 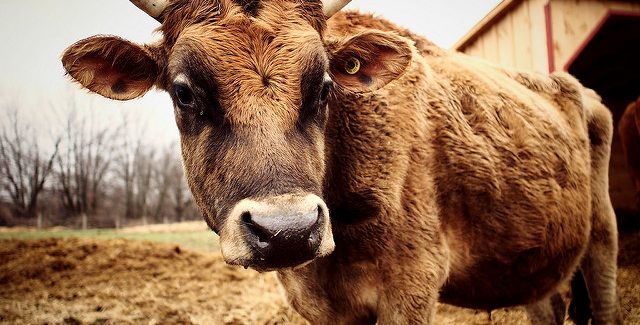 Last week we shared the first public results from the 2016 Faunalytics Animal Tracker. The first installment in our blog series provides an overview of the results and details of the methodology. In this blog we focus in on the question of knowledge and, specifically, how knowledgeable people feel about different animal issues.

Why is knowledge important? For starters, most people need to be aware of an issue before they will change their opinions or behavior about it. If people don’t know about the plight of animals in shelters or on farms or in laboratories, then they are unlikely to be motivated to do anything about it. Tracking knowledge over time and comparing it by issue also helps animal advocates understand where awareness is increasing or decreasing.

The Animal Tracker gauges self-reported knowledge. Essentially, we ask people how knowledgeable they feel about different issues, a method that has limitations (see question wording below). A better approach to gauging knowledge would be to provide a series of true and false statements about the topic and ask people to rate them as true or false, then compare the answers. This more in-depth approach is outside the scope of the Animal Tracker, but self-reported knowledge still provides insight into the minds of average U.S. adults.

Below we explore demographic differences when it comes to self-reported knowledge of animal issues. We also take a look at knowledge-related trends, comparing our latest results with past years of the Animal Tracker. The complete details for all years and demographic groups will be released along with the last blog in this series. We will also be updating our graphing tool with 2016 data and releasing the full dataset combining nine years Animal Tracker results, tentatively in both SPSS and R format.

Below we focus on just the most recent Animal Tracker results (from May 2016) and differences by gender, age, level of formal education, ethnicity, geographic region, and whether or not people have companion animals in the household. The table below shows how each demographic group differs from the total U.S. adult population when it comes to being “very” or “somewhat” knowledgeable of the given animal issue. The highlighted cells show differences that are outside of the error margin for that subgroup. 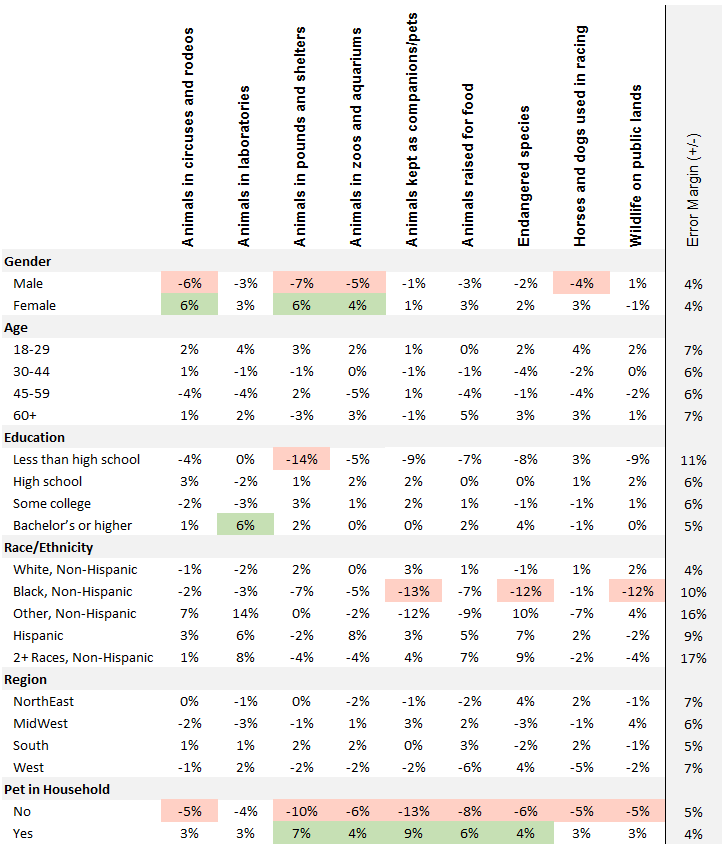 Gender: Women report being more knowledgeable of all types of animals included in the survey except for wildlife on public lands. This difference between genders is most pronounced for animals in circuses and rodeos; 33% of women say they are “very” or “somewhat” knowledgeable of these animals versus 22% of men. The difference is also sizeable for animals in pounds and shelters; 50% of women say they are very/somewhat knowledgeable of these animals versus 37% of men. The gender difference is very small when it comes to animals kept as companions, endangered species, and wildlife on public lands. For all other types of animals, the difference falls between 6% and 9%, with women being more likely to be very/somewhat knowledgeable than men.

Age: Self-reported knowledge is surprisingly consistent regardless of one’s age group. When comparing subgroups by age with the overall sample, the largest difference is +/- 5%. This is within the error margin for the subgroups given their smaller sample sizes. There is some indication that younger people (ages 18-29) are more likely to say they are “very” knowledgeable than others. On the other hand, those who are between the ages of 45-59 tend to self-report as being the least knowledgeable age group.

Education: Perhaps not surprisingly, those with less formal education are also likely to report being less knowledgeable of animal issues than those with more education. This is particularly true for animals in pounds/shelters, as well as companion animals in homes, wildlife on public lands, and endangered species. The findings from people with other levels of formal education show little to no difference, with one exception: those with a Bachelor’s degree or more education were more likely to be knowledgeable about animals in laboratories.

Ethnicity: Differences in knowledge by race or ethnicity consistently show that Black people report being less knowledgeable than average and Latino/Hispanic people report being more knowledgeable. Specifically, Black people say they are less knowledgeable than the average U.S. adult for all of the issues covered in the Animal Tracker. This difference is most pronounced for animals kept as companions, wildlife on public lands, and endangered species. In this sense, Black respondents mirror respondents with less formal education. However, Latinos report being more knowledgeable on most issues in the survey, with the greatest differences for animals used in circuses and rodeos and endangered species. White people are the majority of the U.S. population and also the majority of survey respondents; their knowledge levels closely match the overall U.S. population.

Region: Similar to age, self-reported knowledge is very consistent regardless of one’s geographic region. When comparing subgroups by region with the overall sample, the largest difference is +/- 5%. This is within the error margin for the subgroups given their smaller sample sizes. Those in the Midwest U.S. report being generally less knowledgeable of animal issues, particularly animals raised for food and horses/dogs used in racing. Those in the Northeastern U.S. report being slightly more knowledgeable than the average U.S. adult.

How knowledgeable do you feel about issues that affect the welfare of animals in the following circumstances? (percent saying “very” or “somewhat” knowledgeable)

The survey results are generally consistent over time (allowing for an error margin of +/- 3%). However, there were a few differences worth noting that are outlined below by subject area.

Animals in Circuses/Rodeos: Most recently, from 2013 to 2016, we’ve seen a small uptick in self-reported knowledge, but the increase of 4% is just outside the survey error margin. Moreover, the longer-term trends are completely flat when comparing 2016 with both 2010 and 2008.

Animals in Laboratories: The long-term trend from 2008 to 2016 is essentially unchanged for this category of animals. Knowledge seems to have dipped slightly in 2010 and 2013, but those changes were within the error margin and knowledge has since rebounded to previous levels.

Animals in Pounds and Shelters: Knowledge of animals in shelters appears to have decreased slightly, but the differences are well within the error margin. Note that we do not have data for this category for 2008.

Animals in Zoos/Aquariums: Most recently, from 2013 to 2016, we’ve seen a small uptick in knowledge, but the increase of 4% is just outside the survey error margin. Moreover, the longer-term trends are flat when comparing 2016 with both 2010 and 2008.

Animals Raised for Food: Most recently, from 2013 to 2016, we’ve seen a modest uptick in knowledge, but the increase of 5% is only slightly larger than the error margin. The long-term trend is also unchanged when compared with 2008.

Horses/Dogs Used in Racing: The long-term trend from 2008 to 2016 is essentially unchanged for this category. Knowledge seems to have dipped slightly from 2013 to 2016, but the difference is within the error margin.

Wildlife on Public Lands: The most recent change from 2013 to 2016 shows essentially no change, but the long-term trend from 2008 to 2016 indicates that self-reported knowledge is down 8%.