How important do people think it is to protect animals when engaging in animal-related behavior and is that perceived importance increasing or decreasing?
EXCLUSIVE Exclusive article or blog for Faunalytics.
Author: Faunalytics | Published: October 12, 2016
Photo by Martin de Witte

The love for all living creatures is the most noble
attribute of man.  ~  Charles Darwin

Anyone who studies animal issues recognizes that there is a disparity between people’s attitudes and behavior toward non-human animals. People also have widely varying levels of concern for different animals. For almost 10 years, animal advocates have relied on the Faunalytics Animal Tracker survey to understand those differences more deeply and follow how they’re changing over time.

For the 2016 Animal Tracker, we recently covered the overall survey results and methods and explored the question focused on self-reported knowledge. In this blog we take a closer look at how important animal protection is to U.S. adults when it comes to certain animal-related behaviors. Following is the actual question that we ask every three years, most recently in May 2016:

This question is useful for a variety of reasons, including gaining an overall understanding of how important people think it is to protect animals and a sense of variation by issue. It’s also useful when looking at differences by demographic subgroup (see below). On the other hand, the usefulness of this question is limited by several factors. Most notably, the respondents are a mix of people who actually engage in these behaviors and those who do not.

Complicating things further, some of the behaviors are very “high-incidence,” meaning that a lot of people engage in them (e.g., buying meat/dairy/eggs). Others are relatively rare or “low-incidence” (e.g., attending circuses). That limitation adds to the general caveats of the survey that include self-reporting and social desirability biases, as well as nonresponse bias and other issues.

With those caveats aside, it’s clearly very important for animal advocates to understand how people feel about protecting animals in various situations. The Animal Tracker provides a useful barometer of attitudes and behavior, though its exploration of the topics is relatively shallow. To explore public opinion (and behavior) in more depth, browse the Faunalytics research library or contact us to discuss a custom project.

In the following sections, we explore the demographic differences when it comes to the perceived importance of protecting animals when engaging in different behaviors. We also take a look at trends by comparing our latest results with past years of the Animal Tracker, going back to 2008. The complete details for all years and demographic groups will be released along with the last blog in this series. We will also be updating our graphing tool with 2016 data and releasing the full dataset combining nine years Animal Tracker results for others to analyze.

Below we focus on just the most recent Animal Tracker results (from May 2016) and differences by gender, age, level of formal education, ethnicity, geographic region, and whether or not people have companion animals in the household. The table below shows how each demographic group differs from the total U.S. adult population when it comes to thinking animal protection is “very” or “somewhat” important for the given behavior. The highlighted cells show differences that are outside of the error margin for that subgroup. 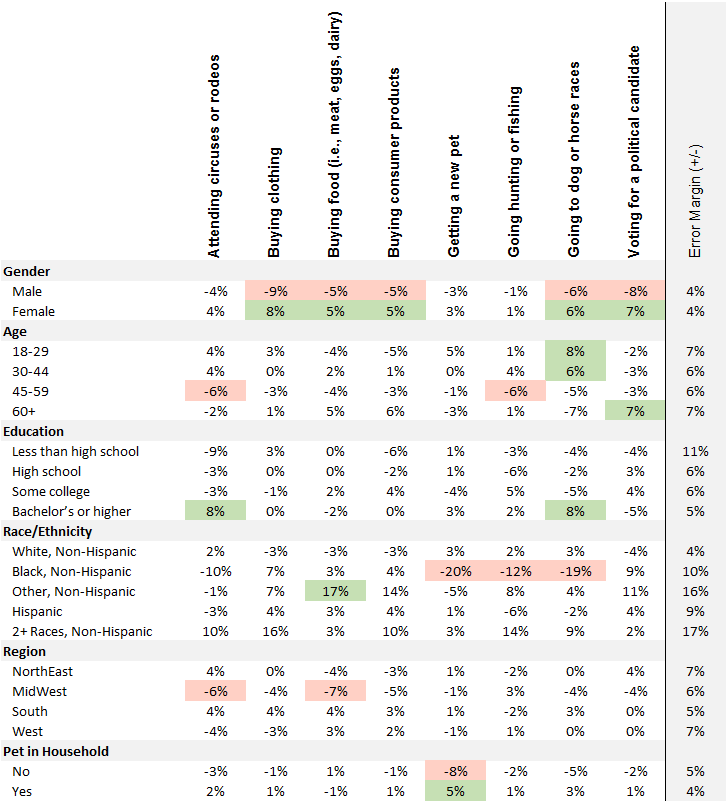 Gender: Protecting animals is more important to women than to men – this is true for every behavior covered in the Animal Tracker survey. The gender disparity is greatest when it comes to buying clothing and voting for a political candidate. Nearly two-thirds of women (62-65%) say protecting animals is “very” or “somewhat” important when engaging in these behaviors, compared to less than half (47-49%) of men. There are also sizable gender differences when it comes to animal protection and going to dog/horse races, buying consumer products, and buying food. All other gender-related differences are within the survey’s error margin.

Education: There are very few significant differences when it comes to one’s level of formal education and belief in the importance of protecting animals. While the differences are small, there is some indication that this belief increases as education increases. For those with less than a high school education, the proportion who say protecting animals is very/somewhat important averages 61% across all of the behaviors presented. For those with a high school education the average is 63%, for those with some college it is 64%, and for those with a Bachelor’s degree or more, the average proportion is 66%. However, the only significant differences are those with the highest level of formal education being more likely to say animal protection is important when attending circuses/rodeos or going to dog/horse races.

Ethnicity: Examining differences by race or ethnicity is subject to higher error margins given that some ethnic subgroups are relatively small. With that caveat, there are only a few meaningful differences when it comes to ethnicity. Most notably, Black people report that animal protection is significantly less important to them when it comes to a few behaviors, including getting a new pet, going to dog/horse races, and going hunting/fishing. Using the first behavior as an example, while 86% of White people and 84% of Latino/Hispanic respondents say animal protection is important when getting a new pet, this was true of just 63% of Black respondents.

Region: While the overall picture indicates that the Midwest region of the United States places less importance on animal protection, most regional differences fall within the survey’s error margin. Midwest respondents place less importance on every animal issue covered in the survey, but the difference is only significant for two behaviors: buying food (i.e., meat, eggs, dairy) and attending circuses/rodeos. Interestingly, there is some indication that respondents from the South place more importance on animal protection, though the differences are small.

How important to you is the protection of animals when it comes to making the following personal choices? (percent saying “very” or “somewhat” important)

The Animal Tracker importance question has been asked four times, most recently in 2016, but also in 2013, 2010, and 2008. To simplify our analysis of the trends, we converted each set of responses into a binary variable where animal protection is considered important if respondents replied “very” or “somewhat” important. It is considered unimportant if they replied “not very important” or “not at all important.” We excluded those who said they “do not know,” which ranged from 9% to 19% depending on the question item.

Overall, the long-term trend since 2008 indicates an increase in respondents’ perceived importance of animal protection for most of the behaviors covered in the survey. The belief seems to have peaked in 2013, however, while the most recent results from the 2016 survey have declined a bit (allowing for an error margin of +/- 3%). The handful of meaningful differences are outlined below by subject area.

Attending Circuses or Rodeos: Belief in the importance of protecting animals when going to a circus or rodeo has increased slightly from the survey’s early years. Those saying the protection of these animals is very/somewhat important was 56% in 2008, increased to 63% in 2013, and declined slightly to 60% in 2016. The long-term difference of plus 5% is just outside of the survey’s error margin.

Buying Clothing: There has been no long-term change in the importance of protecting animals when buying clothes. While there were modest upticks for this question in 2010 and 2013, the level of importance declined again in 2016 to the same level as 2008 (57% saying very/somewhat important).

Buying Food (i.e., meat, eggs, dairy): From 2008 to 2016, those saying it is very/somewhat important to protect animals when buying food increased (significantly) from 67% to 73%. More recent trends are less clear, however, and there has been no change in perceived importance since 2010.

Buying Consumer Products: There was a slight increase from 2008 to 2016 in the proportion of those saying it is important to protect animals when buying consumer products, from 63% to 67%. The difference is just outside the margin of error, however, and more recent trends (since 2010) show little to no change.

Getting a New Pet: In the early Animal Tracker years, from 2008 to 2010, the proportion of respondents saying it is important to protect animals when getting a new pet increased significantly, from 76% to 86%. However, the number was unchanged in 2013 and declined slightly (by 3%) in 2016.

Going Hunting or Fishing: The long-term trend from 2008 to 2016 shows an overall increase in the perceived importance of protecting animals when going hunting/fishing. This went from a low of 55% saying very/somewhat important in 2008 to a high of 66% in 2013. Most recently, however, this proportion declined significantly, dropping by 5% to a level of 61% saying very/somewhat important in 2016.

Going to Dog or Horse Races: Again, the long-term trend from 2008 to 2016 indicates a significant increase in the perceived importance of protecting animals when going dog or horse races. This level went from a low of 47% saying very/somewhat important in 2008 to a high of 59% in 2013. Most recently, this proportion declined slightly, dropping by slightly less than 4%, just within the survey’s error margin.

Voting for a Political Candidate: This is the only behavior tracked in the survey that shows a long-term trend of declining importance. Those saying animal protection is very/somewhat important when voting for a political candidate was 59% in 2008, 56% in 2010, 61% in 2013, and most recently 55% in 2016. The decline of 7% from 2013 to 2016 (a presidential voting year in the United States) is especially noteworthy.

The latest results from the Faunalytics Animal Tracker show some positive changes in behavior and increasing support for humane education.