The worst sin towards our fellow creatures is not to hate them, but to be indifferent to them.  ~  George Bernard Shaw

The Faunalytics Animal Tracker is the only longitudinal survey dedicated to animal issues. It monitors a range of opinions and behaviors relating to animals and animal advocacy. For 2016, we are sharing the results of the Animal Tracker through a series of blogs. The first blog covered the overall results and methods. Our second installment looked at self-reported knowledge, and the most recent blog examined perceived importance of protecting animals when engaging in specific behaviors.

Now we turn our attention to another Animal Tracker question, which is arguably the most interesting and informative question we ask. We gauge what proportions of U.S. adults agree with practices like classroom dissection, buying fur clothing, and eating animals. We also look at how much people agree that animals show cognition, that farmed animals are similar to companion animals, and that people have an obligation to avoid harming animals. Here’s the question:

Do you agree or disagree with each of the following statements?
Scale: Agree; Disagree; No Opinion; Do Not Know

We offer both “no opinion” and “do not know” options because we know from experience that many people do not have well-formed opinions of animal issues. For the statements above, those saying they have no opinion or do not know ranged from a fifth (22%) to more than a third (35%) or respondents. This is a substantial proportion of U.S. adults who neither agree nor disagree with these statements. For analysis purposes, we focus just on the agreement rates for each statement and exclude those who have no opinion or do not know.

When taken separately, each of these statements tracks an important sentiment that advocates working on animal issues need to understand. Whether you advocate for farmed animals, endangered species, companion animals, or animals used for science, this question provides something useful. It also helps us understand and articulate the disparity between how people view our responsibilities toward nonhuman animals and how we treat them in practice.

In the following sections, we explore the demographic differences when it comes to agreement with these statements. We also take a look at trends by comparing our latest results with past years of the Animal Tracker, going back to 2008. The complete details for all years and demographic groups will be released along with the last blog in this series. We will also be updating our graphing tool with 2016 data and releasing the full dataset combining nine years Animal Tracker results for others to analyze.

Below we focus on the most recent Animal Tracker results (from May 2016) and differences by gender, age, level of formal education, ethnicity, geographic region, and whether or not people have companion animals in the household. For this question, we see the largest demographic differences when it comes to gender, education, and ethnicity.

The table below shows the demographic differences for the agree-disagree statements. The values shown indicate the percentage differences in responses for that demographic subgroup compared to the overall U.S. adult population. The highlighted values are larger than the margin of error for that subgroup. 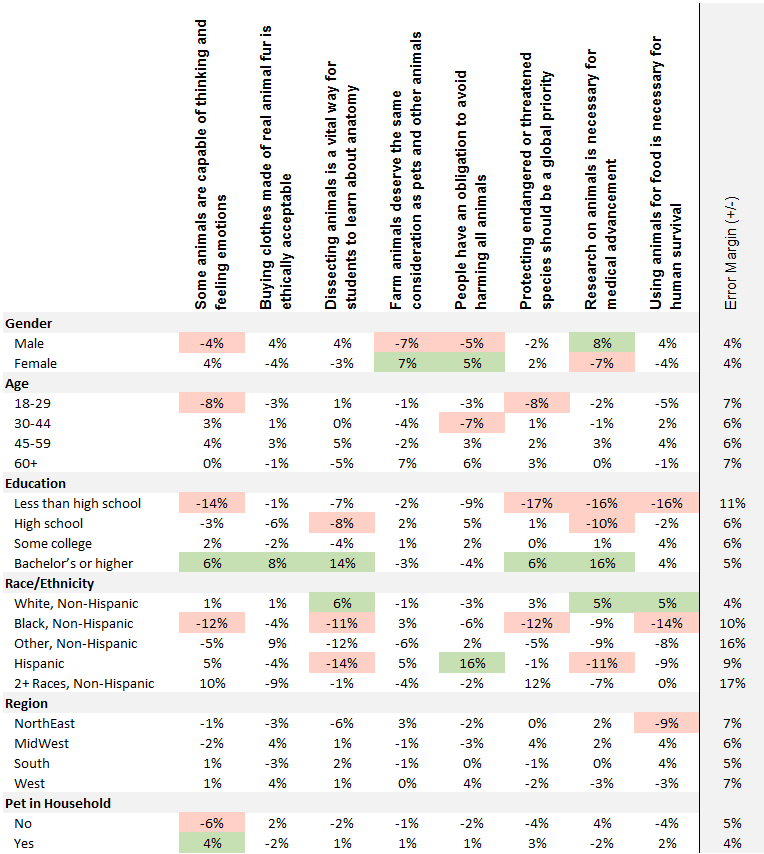 Gender: For every agree/disagree statement included in the Animal Tracker, women exhibit a more favorable attitude toward animals than men. This is consistent with other findings from the Animal Tracker; the gender disparity is substantial. The difference is most noteworthy for a few of the statements. A clear majority (57%) of women agree that “Farm animals deserve the same consideration as pets and other animals,” while less than half of men agree (43%). Women are also more likely to agree that “People have an obligation to avoid harming all animals” – 57% of women agree versus 48% of men. On the other hand, most men (55%) agree that “Research on animals is necessary for medical advancement,” while only 39% of women agree with the statement.

Age: When it comes to age, there are only a few differences that fall outside of the margin of error. Those in the youngest age group (18-29 year olds) are less likely to agree that “Some animals are capable of thinking and feeling emotions” or that “Protecting endangered or threatened species should be a global priority.” Those in the 30-44 age group show less agreement with the statement, “People have an obligation to avoid harming all animals.” The differences are modest, however, and the differences between age groups fall within the error margin for all other statements. Interestingly, as age increases so does agreement with the statements that are positive for animals. The negative statements show a less clear relationship.

Region: The overall Animal Tracker results for this question suggest that those in the U.S. Northeast generally have more positive attitudes toward animals, while those in the Midwest have less positive attitudes. However, there is only one difference that is larger than the survey’s overall error margin. Those in the Northeast are less likely to agree that “Using animals for food is necessary for human survival” compared to the U.S. as a whole. Slightly more than half (56%) of those in the Northeast agree with this statement, compared to 6% of those in the Midwest and the South and 61% of respondents in the West.

Companion Animals in Household: Those who live with companion animals consistently show more positive attitudes toward animals, including in responses to each agree-disagree statement included in the survey. Somewhat surprisingly, however, there are very few significant differences when comparing these subgroups to the entire population. The only sizable difference relates to the statement, “Some animals are capable of thinking and feeling emotions.” While more than three-fourths (76%) of those who live with companion animals agree with this statement, two-thirds (66%) of those without companion animals agree.

Do you agree or disagree with each of the following statements? (percent saying they agree)

The Animal Tracker agree-disagree question has been asked four times, most recently in 2016, but also in 2013, 2010, and 2008. To simplify our analysis of the trends, we focus on just the proportion of respondents who “agree” with each statement. We do not explicitly cover the “disagree” responses in our analysis. We also exclude “no opinion” and “do not know” responses, although these answers are meaningful and might be treated as a measure of awareness of or engagement with a particular issue.

Overall, the long-term trend since 2008 indicates meaningful differences for half of the eight agree-disagree statements included in the Animal Tracker. Short-term changes from 2013 to 2016 also indicate some significant changes. In general, these represent positive changes for animals, although the results are somewhat mixed. The trends that fall outside of the survey’s error margin are outlined below by subject area.

Some animals are capable of thinking and feeling emotions: Agreement with this statement is generally quite high (72%) and it increased slightly in 2010 and 2013. But agreement declined again in 2016 and the long-term trend since 2008 suggests no change and all differences are within the margin of error.

Dissecting animals is a vital way for students to learn about anatomy: About half of survey respondents (47%) agree with this statement as of 2016. While the long-term trend since 2008 shows only a slightly decline in agreement, the most significant change was from 2013 to 2016, when the agreement level dropped by 4%.

Farm animals deserve the same consideration as pets and other animals: The agreement rate for this statement has bounced up and down over the course of the Animal Tracker. In 2008, 56% of U.S. adults agreed with the statement, but in 2010 the proportion declined to 52%. The agreement level then rebounded to 57% in 2013 only to decline again to 50% in 2016.

People have an obligation to avoid harming all animals: There has been very little change in the agreement level for this statement and all changes are within the error margin. The long-term trend from 2008 to 2016 is slightly downward, going from 55% agreement to 52%.

Protecting endangered or threatened species should be a global priority: There has also been almost no change in the agreement level for this statement. In the earlier Animal Tracker years (2008 and 2010), agreement was 69-70%. More recently it has been 73%, but the changes are within the survey’s error margin.

Using animals for food is necessary for human survival: The long-term trend since 2008 indicates declining levels of agreement with this statement. In 2008, 70% of U.S. adults agreed with this statement, while in 2016 that proportion had declined to 64%. The agreement level has declined every year of the Animal Tracker.