How do people feel about the impact of the animal protection movement and its long-term goal to eliminate animal suffering? We have the data.
EXCLUSIVE Exclusive article or blog for Faunalytics.
Author: Faunalytics | Published: October 26, 2016
Wikimedia

I am in favor of animal rights as well as human rights. That is the way of a whole human being.  ~  Abraham Lincoln

As researchers for the animal protection movement for more than 15 years, Faunalytics has had a long-term interest in monitoring changes in attitudes and behavior relating to animals. We designed the Animal Tracker nearly a decade ago as the only longitudinal survey dedicated to animal issues.

This year, we are sharing the Animal Tracker results through a series of blogs. The first blog covered the overall results and our study methodology. Our second installment focused on self-reported knowledge, and the third examined perceived importance of protecting animals when engaging in specific behaviors. Our most recent blog looked at rates of agreement and contradictions in public opinion.

In this post, we cover the remaining two questions that were included in the Animal Tracker 2016 survey. They relate to the perceived impact of the animal protection movement and support for the goal of animal advocates. Below is the actual wording we use for each of these survey questions.

Regardless of your personal opinion about the animal protection movement, how much of an impact do you think it has had on our nation’s policies?

For the two questions above, the proportion of U.S. adults saying they “do not know” was 15% and 18%, respectively, in the 2016 survey results. This is a meaningful percentage of the population that does not know what impact the movement is having or how they feel about the movement’s goals. For analysis purposes in the following sections, we exclude those who responded “do not know.”

The question about perceived impact has consistently produced mixed results, with approximately half of respondents saying the impact has been “significant” or “moderate” and about half saying there has been “very little” or no impact. There have been some interesting changes in the response to this question over time (see below). On the other hand, support for the movement’s goals has remained both strong and steady.

In the following sections, we explore the demographic differences when it comes to perceived impact and support for the movement’s goals. We also take a look at trends by comparing our latest results with past years of the Animal Tracker, going back to 2008. The complete details for all years and demographic groups will be released along with the last blog in this series. We will also be updating our graphing tool with 2016 data and releasing the full dataset combining nine years Animal Tracker results for others to analyze.

Below we focus on the most recent Animal Tracker results (from May 2016) and differences by gender, age, level of formal education, ethnicity, geographic region, and whether or not people have companion animals in the household. To simplify our analysis, we converted each question’s responses into a binary variable. For impact, we combined significant/moderate and very little/no impact. For the goals-related question, we combined strongly/somewhat support and strongly/somewhat oppose. We excluded those who said “do not know.” This approach simplifies things, but also obfuscates some of the more granular (but significant) findings.

The table below shows the demographic differences for the questions relating to perceived impact and support for goals. The values shown indicate the percentage differences in responses for that demographic subgroup compared to the overall U.S. adult population. The highlighted values are larger than the margin of error for that subgroup. 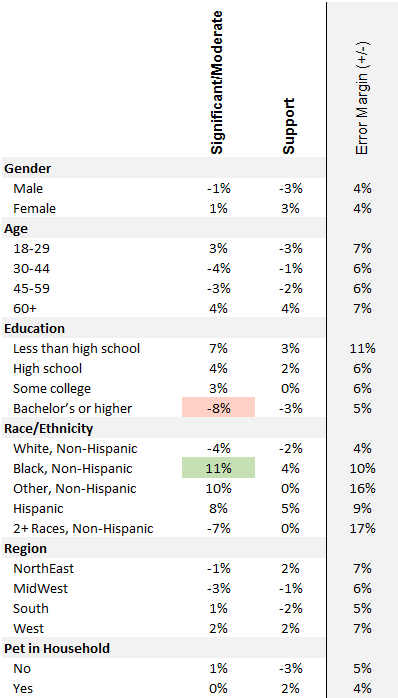 These two Animal Tracker questions covering perceived impact and support for the movement’s goals have been asked four times, most recently in 2016, but also in 2013, 2010, and 2008. To simplify our analysis of the trends, we again converted each question’s responses into a binary variable. Overall, the trends indicate declining belief in the impact of the animal protection movement, but steady support for its overarching goal.

Regardless of your personal opinion about the animal protection movement, how much of an impact do you think it has had on our nation’s policies?

Movement Impact: Over the course of the Animal Tracker, the perceived impact of the animal protection movement has decreased considerably. Those saying the movement has had “significant” or “moderate” impact was exactly half of U.S. adults (50%) in 2008. The proportion increased slightly in 2010 to 53%, but has since declined to 49% in 2013 and 44% in 2016. A clear majority (56%) now believes that the moment has “very little” impact or none at all. This excludes those saying they “do not know,” which has ranged from 12-16% of the responses.

Support for Goals: Public support for the overarching goal of the animal protection movement (“to minimize and eventually eliminate all forms of animal cruelty and suffering”) is quite strong, at 81% for all U.S. adults. That level of support has remained essentially unchanged over the course of the Animal Tracker. While the numbers have declined very slightly over time – from 83% support in 2008 to 82% in 2010 to 81% in both 2013 and 2016 – these very modest declines are well within the survey’s margin of error.

In our next and final blog in this series covering the 2016 Animal Tracker results, we’ll provide our analysis of the overall findings and what they mean for animal advocates. We’ll also share the full results for all years of the Animal Tracker in a public spreadsheet so that you can see and analyze the results for yourself. And we’re working on updating our graphing tool so you can easily visualize and explore the latest results, plus we are planning to provide the full results for all years in SPSS and/or R format.

Stay tuned in the next week or two for the analysis and detailed results!

The Faunalytics Year in Review – 2018

It's been an amazing year for Faunalytics, and we couldn't have done it without you. Check out what we accomplished in 2018, and get a sneak peek at what's in store for 2019.