Attacks on humans by large cats (captive and wild) are real, but the causes are mostly the fault of people. Can we balance ethics and conservation?
ABSTRACT ONLY Only an abstract of this article is available.
PEER REVIEWED This article has been peer reviewed.
Summary By: Faunalytics | This is a summary of an external study | Published: January 17, 2017
Photo by Flickr user jonicdao 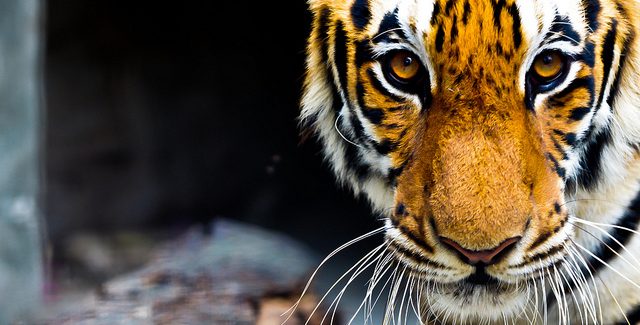 In zoos and private collections throughout the United States, large carnivores live in close proximity to humans. Sometimes dangerously close. In the U.S., only 400 of the estimated 5,000-7,000 captive tigers currently live in accredited zoos. This means that the rest of them are living in unregulated conditions under the supervision of people who may or may not have any experience or ability to handle them.

Around the world, feline carnivores pose at least some threat to humans in their native habitats. The pressures of dwindling populations, habitat destruction, and diminishing natural prey make large carnivore attacks a real possibility. Much of what we know about large carnivore attacks comes from case reports, which often give an incomplete picture of what happened. This study set out to review the actual threat posed by large and exotic cats, both in the wild and in captivity. The goal was to better understand the management of large feline attacks and to examine the intersection of public health and conservation.

The authors reviewed research published from 1950 to 2013. Their article counted tens of thousands of large carnivore attacks on humans, with injuries ranging from minor to fatal. Depending on species and region, the attacks might range from dozens to hundreds per year. The authors note that, in some cases, the worst of the injuries come from microbial infections and other issues that arose following the primary attack. The authors underline the various ways that there is a “spectrum of injury” resulting from cat attacks, and health care providers need to prepare for them.

Ultimately, the authors see attacks by large carnivores as a management issue. They explain that it’s unsurprising given that many species are “losing ground rapidly in their natural habitats because of habitat and prey loss, illegal hunting and trapping for the burgeoning international wildlife trade, exotic animal ownership, exploitation of large carnivores for profit, and retaliatory killing when they prey on livestock.” The solution is not further retaliation, but rather an approach that “ensures biologically appropriate, ethical, safe, and sustainable conservation.” This will need to include addressing both owning exotic animals and exploiting them for profit.