Stemming The Rise Of Pig Consumption In China

Presenting consumers with information about the risks associated with eating pigs ("pork") can have a significant impact on consumption.
ABSTRACT ONLY Only an abstract of this article is available.
PEER REVIEWED This article has been peer reviewed.
Summary By: Faunalytics | This is a summary of an external study | Published: July 20, 2016
Photo by Flickr user hoobandmoonar 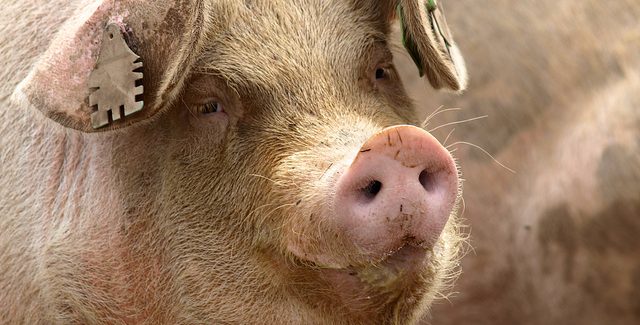 China is the biggest consumer of pig products (“pork”) in the world. However, recent safety incidents involving tainted pork have left Chinese consumers with a high level of uncertainty and mistrust regarding the health and safety of pork. This paper, published in Meat Science, sought to determine the impact of information about the benefits and risks of eating pork on Chinese consumers’ attitudes and intentions.

The authors surveyed approximately 900 consumers before and after they were exposed to one of three messages: a positive message extolling the potential health benefits of pork, a negative message about potential human health risks associated with hormones and additives, and a “neutral” message containing text from both the positive and negative messages. In order to evaluate perceived credibility of sources, each message was labelled as originating from the government, a research institution, or the pork industry.

To explain the overall decline in intention to eat pork, the authors suggest that the “mere exposure to information about pork triggers a kind of rational or socially desirable response in the sense of intending to reduce pork consumption.” Taking a pro-industry stance, they suggest that the government and pork industry should engage in proactive positive communication strategies about pork. But they also warn that such a strategy “needs to be backed up by far more robust hygiene and safety control on the production and processing sites.”

For animal protection advocates, the study provides encouraging evidence that information about health risks associated with meat can significantly impact perceptions and intended consumption of related meat products. Additionally, it suggests that safety incidents can have long-lasting repercussions that advocates could potentially leverage. Finally, advocates working in China should note the findings that consumers are more likely to trust information associated with research institutions and that negative changes in perceptions of nutritional value and health were stronger among female than among male participants.