Study provides the first scientific, empirical evidence for a phenemonon that animal advocates have known about calves for a long time.
FULL TEXT The full text of this article is available.
PEER REVIEWED This article has been peer reviewed.
ANIMAL RESEARCH This article involves research on captive animals, which Faunalytics opposes.
Summary By: Faunalytics | This is a summary of an external study | Published: April 4, 2016
Photo by Flickr user photommo 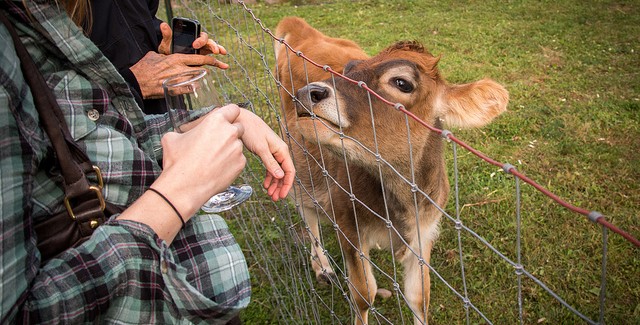 Separating calves from their mothers is a major welfare issue in the dairy industry. Mammals in the wild form close mother-offspring bonds that generally last longer than those formed in captive environments like farms. Such bonding is important for the development of young animals who rely on their mothers for food, protection, and information about how to survive. Our intuition tells us that abruptly and prematurely breaking this bond is distressing for both the mother and her offspring. Until recently, however, few empirical studies investigated the emotional effects of mother-offspring separation in captive environments.

One way that scientists can determine what animals may be feeling in response to an event in their environment, like mother-offspring separation, is through judgment bias tasks. This type of experiment is able to show us whether the emotional effect that an event (or object) has on an animal — be it positive or negative — will influence the animal’s response to other neutral events or objects. To illustrate this concept, consider someone who is feeling down after watching a sad movie. If you were to ask this person out for a cup of coffee, they might hesitate or decline your invitation not because they dislike coffee, but because socialization is less appealing to them when they feel depressed. On the other hand, someone who is in a cheerful mood after having just watched a funny movie might be more inclined to accept your invitation because socialization is appealing to them when they are happy.

Scientists have used judgment bias tasks to determine the emotional state of animals ranging from capuchin monkeys to pigs to honey bees. The study described here is the first to use a judgment bias task to show that calves remain in a negative emotional state for at least 2.5 days following separation from their mothers. Specifically, this study was conducted on 13 male calves and their mothers at a dairy education and research center in British Columbia, Canada. The calves were allowed to suckle for the first 24 hours, and then the cows were fitted with udder nets to prevent suckling. The calves and cows remained in the same housing unit for 48 days, after which time they were physically separated.

The judgment bias task involved two steps. First, calves were trained to respond to two cues – one white and one red computer screen. When the calves approached the white screen, they were rewarded with milk. This made the white screen a “positive” cue. When the calves approached the red screen, they received no milk reward and had to wait one minute before being presented with another screen. This made the red screen a “negative” cue. After calves learned the difference between the positive and negative cues, they moved onto the testing phase of the experiment.

During testing, calves were presented with 23 white screens, 22 red screens, and 15 screens of a new, ambiguous color, which the study authors made a less saturated color of red (i.e., more like pink). Calves were presented with all three screens both before and after physical separation from their mothers. Because the calves had not seen this colored screen before, they did not know if approaching it would yield the milk reward. Therefore, their decision of whether or not to approach the screen was not based on previously learned information but rather, it is assumed, on their current emotional state. The study authors hypothesized that if the calves were experiencing negative emotions after separation from their mothers, they would be less motivated to approach the screen than they were prior to separation.

Results showed that prior to separation, the calves approached 72% of the ambiguous screens; for at least 2.5 days after separation, they approached only 62% of these screens. That calves approached fewer of the ambiguous screens after separation indicates they were experiencing emotional distress. The results of this study are significant because they provide the first empirical evidence that calves experience prolonged distress after separation from their mothers. Animal advocates can use this information to demonstrate that, like other mammals, food animals rely on maternal bonding for their emotional well-being. It is also good information to support the implementation of more humane practices in the dairy industry.