Self-Awareness In Fishes: When Passing The Mirror Test Isn’t Enough

Researchers find that some fish species can pass all phases of the mirror self-recognition test. However, in this process, the researchers question the adequacy of the test itself.
FULL TEXT The full text of this article is available.
PEER REVIEWED This article has been peer reviewed.
ANIMAL RESEARCH This article involves research on captive animals, which Faunalytics opposes.
EXTERNAL STUDY This is a summary of an external study.
Summary By: Lukas Jasiunas | Published: May 21, 2019
Photo by David Clode on Unsplash

The ability to perceive and recognize a reflected mirror image of oneself has long been considered a hallmark of cognition among species. Around 65% of human infants pass the mirror test by the age of 18 months, and scientists claim that accomplishing this act truly takes self-awareness. And although it’s true that some other animal species such as primates, elephants, dolphins, and corvids can also pass it, many others appear to be unable to rise to the challenge of recognizing themselves in a mirror.

In fact, no non-mammal vertebrates (as well as one bird species) have passed the “mirror test” to date. This may seem surprising, as many other vertebrates such as fishes exhibit sophisticated cognitive capacities, including remembering, playing, using tools, predicting the behavior of others and cooperating. Previous studies show that the perceptual and cognitive abilities of fish often match or exceed those of other vertebrates, suggesting that the cognition of fishes could more closely approach those found in humans and other apes.

In this study, a group of scientists from Japan, Switzerland, and Germany expressed their concern that the mirror test, having been specifically designed for primates, may discriminate against animals who cannot directly touch themselves, and thus, their cognitive abilities may be misrepresented. Nonetheless, they set off to investigate whether cleaner wrasses (L. dimidiatus), a type of small reef fishes, could pass the mirror test.

They hypothesized that this species shows great potential for passing, as the fishes form mutualistic relationships with larger client fishes by feeding on ectoparasites living on the clients. Additionally, cleaner wrasses are highly social, interacting with the same individuals over long periods of time, and show sophisticated cognitive abilities such as tactical deception and reconciliation. Their natural behavior would make test failure very clear, as biting at the mirror surface would show that they didn’t perceive the reflections as themselves.

Typically, when a “mirror testable” animal is exposed to a mirror, the following three behavioral phases are observed:

In this study, the fishes went through all three phases comparably and spent significantly more time in postures that would allow them to observe color-marks in the mirror reflection – a similar finding to previous cases with dolphins. The fact that the wrasses did not attempt to remove the markers from their bodies without the mirror indicates that tactile stimuli alone are insufficient to bring such self-cleaning responses about. Instead, direct visuals or a combination of visual and tactile stimuli are needed.

The scientists also tested for the possibility that scraping attempts are manifestations of the fishes ‘hard-wired’ instincts to remove anything and everything resembling a parasite. They placed identical marks on the surface of the mirror itself. No attempts to remove these marks were observed. Similarly, the researchers also checked if the fishes’ reactions to their reflections were genuine – when the fishes were shown other cleaner wrasses behind a glass, the observed responses were very different and were typical peer interactions.

The researchers highlight that their results will lead to both welcome controversy and dispute. Three possible interpretations include:

For their part, the researchers concluded the latter. However, the reason why is not what you might think: They concluded that interpreting the results of a standardized test subjectively is both logically untenable and taxonomically chauvinistic.

Animal advocates will surely take issue with keeping any species in captivity simply to study their sentience. Although the study does not “prove” self-awareness in fishes, it does open up a discussion on the proper ways of establishing the presence of such a cognitive quality, and reveals the inadequacy of current methods. The results will surely spark further discussion on fish as the intelligent and sentient animals that they so clearly are; for advocates, this discussion necessarily involves considering non-invasive ways to further study them. Resolving the potential inadequacy of cognition determination tests – and how to conduct them ethically – is of utmost importance, because the intelligence of many species might be overlooked simply due to biological differences. 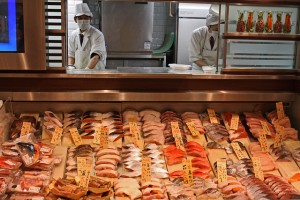 This study examined the sale of fish products labeled with a three-tiered 'sustainability' index, producing mixed results and a 15% overall decline in sales.