The Prevalence Of Mastitis In Dairy Cows

Subclinical mastitis is present in over 20% of dairy cows. How can this help advocates campaigning against factory farms?
ABSTRACT ONLY Only an abstract of this article is available.
Summary By: Faunalytics | This is a summary of an external study | Published: September 20, 2016
Photo by Flickr yser mpcaphotos 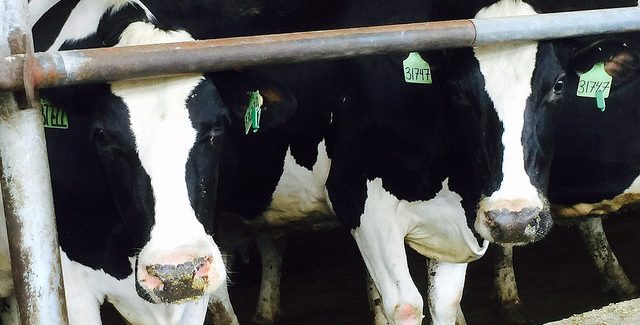 The authors analyzed data on somatic cell (i.e., white blood cell) counts in milk samples collected from Swiss dairy farms 11 times per year from 2006-2010. An increase in somatic cell counts indicates the presence of bacteria that causes mastitis. The authors assumed that a somatic cell count equal to or greater than 100,000 cells/ml is indicative of subclinical mastitis (SCM), which means that the clinical signs of mastitis are not yet showing but the infection is present. The overall presence of SCM in the authors’ milk samples was 20.6%, a figure they deemed as “relatively high.”

Additionally, the authors explored 12 potential risk factors for SCM and found that a handful of them are associated with increased SCM. These include breeding cows for high milk production, for milk with high fat content, and for milk with a high protein-to-fat ratio. In addition, they found that cows whose milk has both low urea and high protein concentrations are at greater risk as are cows with low-hanging udders, which are more prone to injury. The authors also found that cows who had SCM at the time of their first test were more likely to develop chronic mastitis and to “leave the herd,” presumably by being culled. The authors recommend improved strategies for genetic selection and health management of dairy cattle.

Switzerland is primarily characterized by small, family-owned dairy farms where cows often have ample access to alpine pastures. (Pasture access provides a number of health benefits for cows, including reducing risk for mastitis.) The high prevalence of SCM on these small-scale farms and the risk factors associated with it have troubling implications for factory farming operations, which are increasing in the US. Breeding cows to produce high yields of milk and to produce milk with high fat content are two common practices on factory farms.

The authors also state that urea levels in milk can drop when cows don’t receive the right amount or type of feed, both criticisms that are often leveled at factory farms. Advocates may consider adding these risk factors to other commonly cited causes of mastitis, including the use of bovine growth hormone and industrial milking machines.