According to this study, about half of U.K. farmers believe that positive human contact such as calling cows by their individual names improves milk production.
FULL TEXT The full text of this article is available.
EXCLUSIVE Exclusive article or blog for Faunalytics.
Summary By: Faunalytics | This is a summary of an external study | Published: April 6, 2009
Image by Unsplash user Anton Darius | @theSollers

This study by Newcastle University (England) examines how farmers’ attitudes toward their cows may influence milk production. About half of U.K. farmers believe that positive human contact is likely to lead to “good milking temperament.”

This study was conducted among 516 U.K. dairy farmers. Among the major findings: 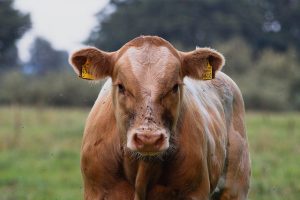 In a series of focus groups, veterinarians gave their thoughts on how to improve cow welfare on farms, including more education for farmers.

In a large study trying to determine animal-welfare values in Canadian consumers, it was found that most preferred an environment where animals could move and behave normally, for animals to be handled with respect and without pain.

This study tested Norwegian dairy farmers correlation between empathy and the treatment of diary cows.