Cows can recognize their herd mates, based not on smell or touch, but based solely on visual identification.
ABSTRACT ONLY Only an abstract of this article is available.
PEER REVIEWED This article has been peer reviewed.
ANIMAL RESEARCH This article involves research on captive animals, which Faunalytics opposes.
Summary By: Faunalytics | This is a summary of an external study | Published: March 7, 2016
Photo by Flicker user macieklew 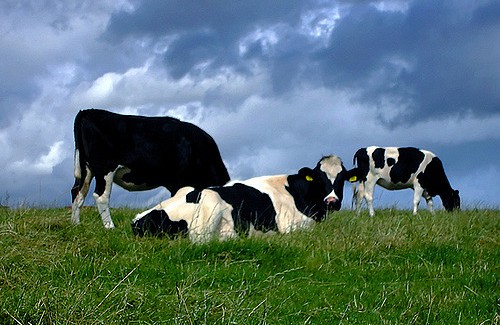 For those of us who follow the stories of rescued farm animals, it is not uncommon to read anecdotal accounts of the special bonds that these animals form with each other and their human care takers. The behaviors described in such accounts suggest that these animals are more self-aware and intelligent than they are often given credit for.

Research on the cognitive and emotional capabilities of farmed animals is in its infancy, but the number of studies is increasing as public concern for farmed animal welfare grows. The study reviewed here contributes to a growing body of research on the cognitive capabilities of cows, especially related to their interactions with each other. Among herd animals, recognition of individuals is important to maintaining stable social groups. The authors of the current study tested whether heifers (cows that have not yet given birth to a calf) can recognize other individuals in their social groups using only visual cues (pictures).

First, the authors tested whether heifers could recognize pictures (two-dimensional digitized color posters) of herd mates. The experimental set-up involved presenting each test subject with two pictures – one of a familiar heifer from their social group and one of an unfamiliar heifer. The authors recorded how long it took the test subject to approach and sniff, lick, or touch one of the two pictures with her nose or tongue. These are considered exploratory behaviors and indicate the heifer’s preference for the picture of the familiar individual. (These behaviors also might mean that, at least initially, the heifers were confusing the pictures with real cattle.)

The second part of the study looked at whether the heifers could place unfamiliar and familiar group mates into separate categories. Heifers were presented with 20 images of six familiar heifers. They had not been presented with these specific images in previous tests, and images consisted of frontal views and various profiles of each heifer. The test subjects were rewarded for correctly identifying three pictures of familiar heifers.

This protocol was then repeated, but in the second phase the heifers were rewarded for identifying three unfamiliar individuals out of a set of 20 images. Successfully performing these two tasks indicated that the heifers understood the concepts of familiar and unfamiliar as categories into which group mates could be placed. All eight heifers successfully completed this task.

In sum, the study offers empirical evidence that heifers’ can successfully identify familiar group mates based solely on pictures and that they can categorize other cattle as familiar or unfamiliar based on pictures, too. The study also shows that heifers seem to prefer familiar individuals over unfamiliar ones. Further studies that explore preference for certain herd mates over others could lend support to the argument that cows engage in complex social interactions and are capable of forming unique bonds with individual group members.

For advocates, especially those who do not necessarily have direct contact with animals used for food, this study serves to reinforce some of the ethological aspects they may already believe intuitively. While the result – that cows can visually recognize their familiar herd mates and act accordingly – may not be mind-blowing for advocates, it is the kind of information that can help people understand how much the animals on their plate used to think and feel.

Dairy cows' fearfulness and sociability are highly consistent over time. Their individual differences can affect the way they perceive and react to uncertainty in their environment.