New research shows that slow lorises develop repetitive movements, posture, or speech due to stress endured in the exotic pet trade.
ABSTRACT ONLY Only an abstract of this article is available.
PEER REVIEWED This article has been peer reviewed.
Summary By: Faunalytics | This is a summary of an external study | Published: October 12, 2016
Photo by Flickr user ironammonite 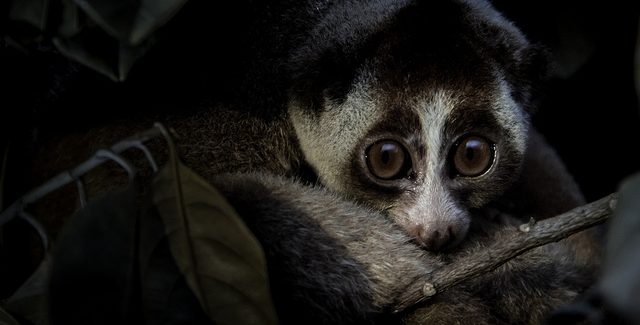 The trade in illegal wildlife is a major problem in Southeast Asia that ripples out to many different parts of the world. Whether to supply markets with animal parts for traditional medicine or to supply people with exotic pets, the process of capturing and keeping wild animals severely compromises their welfare. One animal that has become especially popular in the exotic pet trade—in part because of viral online videos—is the slow loris. In the wild they have home ranges of up to 35 hectares and can travel over two kilometers in a night. Thus, captive conditions may pose significant welfare problems for this animal.

The current research uses slow lorises as a case study to demonstrate how the welfare of wild-caught animals may be “brutally” compromised in captivity. Specifically, the researchers looked at how wild-caught slow lorises responded to a captive environment. They used stereotypic behavior (repetitive movement, posture, or speech) as an indicator of bad welfare, hypothesizing that increased exposure to cramped conditions or socially stressful situations would lead to an increase in stereotypies.

The study, which was conducted at the Ciapus Primate Rescue Centre in Indonesia, revealed that 33% of the wild-caught lorises housed at the Centre displayed stereotypic behavior. This is nearly twice as many as observed in a 2005 study of captive-bred lorises. The current study also found that stereotypic behavior decreased as the number of lorises increased in each enclosure. While people have assumed for some time that lorises are solitary, recent research shows that in the wild the animals sleep in social groups and interact with each other throughout the night. Thus, lorises kept in solitary confinement may experience increased levels of stress.

The study shows that even rescue center conditions may present welfare problems for slow lorises. Thus, it is safe to assume that the conditions they endure in the pet trade and as pets, including being kept in solitary confinement or in unnatural social groups, may cause them a great deal of stress. The slow loris’ natural habitat is truly the best place for them.