Research shows that identifying the most environmentally friendly way to produce milk is unclear, challenging the notion that dairy products are "sustainable."
ABSTRACT ONLY Only an abstract of this article is available.
PEER REVIEWED This article has been peer reviewed.
Summary By: Faunalytics | This is a summary of an external study | Published: June 30, 2016
Photo by Flickr user canadianveggie 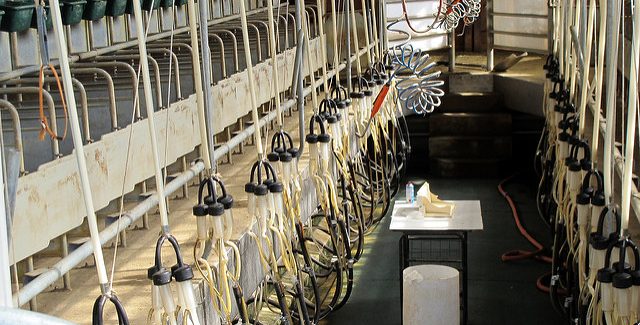 Some countries in Europe have at least partially resisted the growth of factory farming. But in the last several decades, that resistance seems to be eroding. The recent trends seem to be motivated by concerns about climate change, sustainability, and “efficiency.” Specifically, for the production of milk and dairy products, environmental concerns are driving a discussion about the best approach to farming (animal welfare concerns are secondary). Some researchers have found that “low stocking density and low production intensity” farms have the least environmental impact. Others have found that “fewer cows producing more milk at lower stocking rates is required.” However, few studies have looked at full Life Cycle Assessment (LCA) of milk production processes, which is a widely accepted way of measuring environmental impact.

To this end, researchers in Italy analyzed “the environmental performances of a sample of dairy farms, both on a global and on a local perspective, through an LCA approach.” They studied a sample of 28 different dairy farms across Northern Italy. They then matched the results of their LCAs with other characteristics of the farms to “identify the relation between environmental impacts and… farming intensity.” The researchers gathered a variety of data, including through extensive farmer interviews. They also conducted chemical analysis and measured income over feed cost (IOFC) to get a full sense of environmental impact as well as economic viability.

When comparing farm intensity and environmental performance, the researchers clustered similar farms into three groups. The first one (“high”) included ten farms with “high milk production per hectare, high percentage of arable land on total land, large land area sowed with maize for silage, high stocking density, high milk yield per cow, high dairy efficiency, high use of concentrate and maize silage in the cow rations instead of grass hay.” Cluster two (“medium”) was less intensive than the “high” group, and the third cluster showed low scores on these criteria. The variation between production methods was so small that the researchers consider them all “similar.” But they did find some differences. “Low farms showed higher on-farm energy use compared with the high ones. High farms had lower on-farm land use impact compared with the other 2 groups, whereas low had lower off-farm land use than high and medium.” The farms didn’t show major differences in environmental impact, but showed substantial differences in land usage: “increased output per hectare invariably led to increased emissions per area.”

What is the takeaway? Is all dairy production created equal? The researchers are not willing to go that far, say instead that it is “difficult to clearly identify” the relationship between farm intensity and environmental performance. When you increase farm intensity, the environmental impact also increases, but it’s not clear that any particular form of dairy production is more “environmentally efficient” than another. However, it’s worth noting that this study looked strictly at the environmental impact of different systems and not the animal welfare implications. While lower intensity systems might not be more environmentally efficient, they may be far better for animal welfare. The urgency of climate change is driving a focus on efficiency, but animal advocates must also keep researchers, farmers, and people focused on the urgency of animal suffering.