Cultured Meat As An Ecological Solution

If all meat produced in the EU-27 was replaced by cultured meat, GHG emissions would be reduced by 98.8%, land use 99.7%, and water use 94% compared to current meat production practices.
FULL TEXT The full text of this article is available.
Summary By: karol orzechowski | This is a summary of an external study | Published: August 16, 2015
Photo by Flickr user fabricedenolla 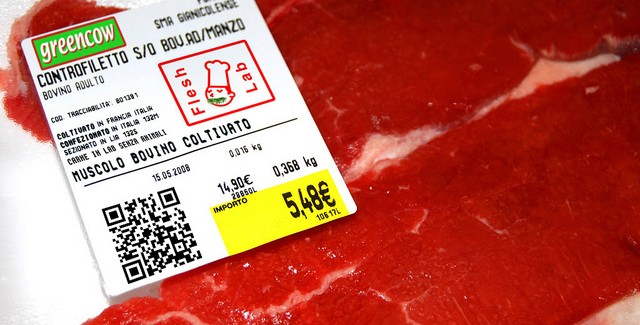 Cultured meat (also known as in-vitro or laboratory meat) is a controversial subject among animal advocates: How can we, on one hand, advocate for eliminating animal products from our diet, while on the other hand, fail to recognize the great benefit to animals that might come from “creating” meat in a lab? Is it hypocritical to support the creation and consumption of products that come from animal cells, as long as the ethical wrong of raising and killing sentient beings has been removed from the equation? Moreover, is the very act of creating cultured meat somehow “playing God”?

For a long time, these questions have been mostly rhetorical or speculative – the stuff of science fiction. As technology advances, however, the subject of cultured meat becomes ever more pressing and real. The production and consumption of cultured meat is becoming possible, which means that animal advocates need to establish an ethical position on it. While some of us might be against eating cultured meat and don’t want to promote it to others, some major animal advocacy groups support the idea, and have even contributed money to companies that are developing cultured meat products. Though the issue continues to be controversial within the animal protection movement, the industry keeps moving forward, and this recent research paper gives advocates a major reason to support its production: environmental protection.

As many animal advocates know, factory farming is an environmentally devastating practice. In contrast, the production of cultured meat is carried out by creating muscle cells in a bioreactor, on a medium that contains a kind of bacteria that is then supplemented “with growth factors and vitamins.” This study looks at the overall production process of cultured meat and compares it to that of conventional farming. The conclusion is that cultured meat production is more environmentally friendly, to a surprising extent:

The authors note that there are many technological and social issues that still have to be addressed before cultured meat can become a commercial and cultural norm: “The main challenges for scaling up the production include development of growth media, optimising the production conditions and making the whole process financially feasible.” As production gets more stable and reliable, the potential widespread environmental benefits of replacing conventional farming can become a reality. For those advocates who are weighing up their thoughts on promoting the eating of cultured meats, this study offers food for thought.