Research shows that making a positive impact on biodiversity can be as simple as changing our diets.
ABSTRACT ONLY Only an abstract of this article is available.
PEER REVIEWED This article has been peer reviewed.
Summary By: karol orzechowski | This is a summary of an external study | Published: December 3, 2015
Photo by Flickr user bioversity 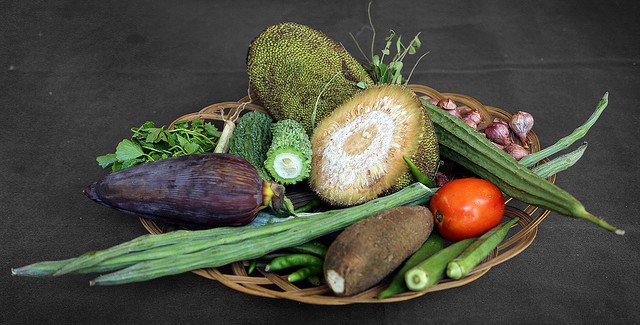 There is a global crisis when it comes to the loss and degradation of the world’s remaining wild spaces, and intensive animal agriculture is the “predominant driver” of the crisis. As wilderness around the world has been converted to cropland or grazing land, we have lost nearly half of all natural grassland, and a third of all natural forests. Agriculture is the leading cause of deforestation and although some of that expansion is for cropland for direct human consumption, animal agriculture and feed production accounts for a startling three-quarters of all production. In other words, animal agriculture is rapidly taking over the planet and there is a direct link between this trend and the destruction or degradation of various habitats and a loss of biodiversity around the globe.

Quantifying this loss is difficult, but researchers say that animal product consumption by humans (or, “human carnivory”) is “likely the leading cause of modern species extinctions, since it is not only the major driver of deforestation but also a principal driver of land degradation, pollution, climate change, overfishing, sedimentation of coastal areas, facilitation of invasions by alien species, and loss of wild carnivores and wild herbivores.” In this paper, researchers present an overview of these connections and describe the most likely patterns of future biodiversity loss. Specifically, researchers wanted to show the influence of China on this relationship and propose some solutions for mitigating the impact. Based on a thorough literature review, the researchers present findings through statistics as well as visual representations.

The conclusions are certainly grim. Under the heading of “livestock [sic] driven climate change,” they note that, in just the last 30 years, the effects of climate change on species diversity have been profound. And the effects are expected to become more dramatic as time goes on. With middle-of-the-road predictions for climate change, an estimate 15%–37% of species will be “committed to extinction” by 2050, and climate shifts could also seriously damage crop yields.

China will play an especially important role in the coming decades; between 2000 and 2030 China is expected to add approximately 250 million new households to the country, which is more than the total number of households in all of the western hemisphere in 2000. Animal products are on course to make up 30% of the Chinese diet in coming years, while in 1960 animal products only accounted for 5% of the Chinese diet. And yet, despite rising animal product demand, “the extent of agricultural land in China has been decreasing under pressures of urbanization and land appropriation for mining, forestry and aquaculture.” Adding to that, grasslands across the country have been “severely degraded” by overgrazing and other pressures; 90% of China’s grasslands are now considered degraded.

For anyone who cares about farmed animals, wildlife, or biodiversity (or all of the above), the situation is critical. The authors proposal options to help address the crisis, including three possible solutions to “improve human nutritional health, decrease the land demands of agriculture, and protect plant and animal biodiversity.” More specifically:

For animal advocates, the first solution is the most compelling, while the second solution can be challenging. The authors of this report note that beef has a particularly large ecological footprint and that cutting it out could have a major positive impact. For advocates who care as much about animal suffering as environmental impact, the risk is that consumers may switch from beef to products like chicken or seafood, both of which require killing many more animals for the equivalent “protein” of one cow. This report’s authors acknowledge that the demand for animal products will have to go down significantly before options such as “diverse agroecological production systems” can be implemented to any significant degree.