Catch Or Release?: How Anglers Make Their Choices

How do recreational fishers make their "harvesting decisions?" Can that data help us influence the impact that anglers have on fish communities?
ABSTRACT ONLY Only an abstract of this article is available.
PEER REVIEWED This article has been peer reviewed.
Summary By: Faunalytics | This is a summary of an external study | Published: July 19, 2016
Photos by Flickr user aigle_dore 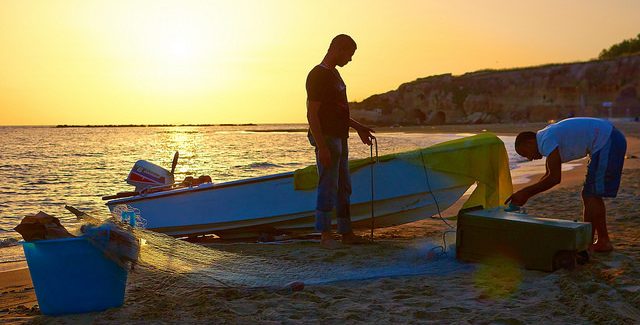 “Recreational” fishing is a major source of suffering in North America, Europe, and Australia. Indeed, the activity impacts fish communities throughout the world. Commonly, fishing or “angling” is regulated by setting a “creel” or “bag” limit. These limits set the number of fish per day that anglers are allowed to catch and/or keep. It’s difficult to estimate the different in suffering when it comes to catch-and-kill fishing or catch-and-release fishing. Both undoubtedly cause suffering.

The angler’s decision to keep or release a fish, therefore, could have major implications for fish welfare. The size of the fishes caught is one important factor, but the interplay between fish size and creel limit can make for a complicated dynamic. This study of a fishery in Nebraska looked at how a shift towards more restrictive creel limits could affect the size of fish that are killed. Also, “to determine what influence, if any, these more restrictive creel limits had on the anglers’ effective (i.e., self-imposed) limits.”

The study ran from 2010 to 2011 and involved interviews with anglers and surveys of their catch. There was “no clear evidence that more restrictive creel limits had an effect on the self-imposed length limits” of anglers. However, researchers say there is a point somewhere between “very restrictive” and “very liberal” creel limits. Overall, the authors emphasize that the setting and size of creel limits is a very important factor in how anglers set self-imposed limits. Understanding these limits “is needed to predict the influence that anglers have on fish communities.” For wildlife advocates, this study gives insight into how much creel limits – both government and self-imposed – affect fish populations.