This study from the Humane League looks at what makes pro-veg literature effective, focusing in particular on the images that adorn the covers of leaflets, and what makes one picture more effective than another.
FULL TEXT The full text of this article is available.
Summary By: karol orzechowski | This is a summary of an external study | Published: February 12, 2015
Adjusted from an image by Flickr user Taekwonweirdo under Creative Commons License

This study from the Humane League looks at what makes pro-veg literature effective, focusing in particular on the images that adorn the covers of leaflets, and what makes one picture more effective than another. The research finds that most respondents have a positive reaction to leaflets with photos of food on them, as well as leaflets that show pictures of happy, healthy people. Conversely, the study found that images of animal suffering, even if “moderate,” significantly decrease the interest of many potential readers. The findings are part of ongoing studies by the Humane League Labs, with the goal of increasing the efficiency and effectiveness of outreach efforts.

What kinds of images make a non-vegan or non-vegetarian want to pick up pro-veg literature and read it? This seemingly simple question is the subject of research by the Humane League Labs, who have surveyed over 800 non-veg adults over 18 (with 56% of respondents aged between 18-24) to find out what kinds of pictures make them most open to a pro-veg message. The study unfolded like this: “Twelve cover photos were tested, each with a single image that represented one of four categories: people (3 versions), food (1 version), happy animals (4 versions), and animals suffering in factory farms (4 versions). Respondents were presented with a random selection of 3 leaflet covers and were asked to select the one they would most like to read.” Though not every cover was shown to each respondent, the overall findings reveal that images of humans and food are preferred over pictures of happy or suffering animals.

Even though only one image solely of food was used as a cover, it was preferred over 58% of the time. By contrast, covers featuring people were favored on 49% of occasions, while happy animals were selected 34% of the time, and images of animal cruelty managed only 15% of favorable choices. Interestingly, when it came to images of people, “covers showing anonymous healthy people were preferred over a cover showing celebrities.” Likewise, the study further breaks down which animal images are favored, noting that “the covers of cute baby chicks and piglets were more preferred than the cover of a baby calf and of fish.” Unfortunately for fish, images of them were almost universally not preferred by readers. According to the data, “the cover of happy fish was generally avoided and was selected at a similar rate to covers depicting cruelty to animals.” The study notes that “this is consistent with previous findings that fish do not evoke as much interest or empathy on the part of humans as do other animals, which may in part be due to difficulty recognizing facial expressions or emotion in fish.” Based on these results, the study authors recommend that advocates avoid using pictures of fish in outreach literature wherever possible, opting instead for images that have a better response rate.

The conclusions of the report are in many ways a wake up call for advocates, and challenge us to go against our likely gut feelings. “While one might hope that images of the everyday cruelty experienced by animals on factory farms would generate interest,” the authors say “these data indicate that this is not the case. Even moderate/relatively nongraphic images of cruelty seem to evoke avoidance.” This will lead leafleting activists to reconsider what their ultimate goal is. If we want our pro-veg materials to be taken, read, and considered we are likely to need to change our approach. Though we may wish to put a visual message of animal suffering front and center, it may be more effective to have that type of message wrapped in images of good food, and happy, healthy people.

Original Abstract:
One commonly-used way of educating the public about factory farming and vegan eating is through distributing printed materials such as flyers, leaflets, and vegetarian starter guides.

One of the most important sections of such literature is the cover. As the ‘packaging’ of its content, the cover has only seconds to grab the attention of readers, leading them to either take the literature and begin reading it, or to ignore it and keep walking. The picture on the cover can be worth a thousand words, as the adage says, but only if it is relevant and can evoke an interest in reading the pages that follow.

To measure the effectiveness of different types of cover photos in motivating people to read a pro-vegetarian leaflet, an online survey was conducted by The Humane League in the summer of 2014. Twelve cover photos were tested, each with a single image that represented one of four categories: people (3 versions), food (1 version), happy animals (4 versions), and animals suffering in factory farms (4 versions). Respondents were presented with a random selection of 3 leaflet covers and were asked to select the one they would most like to read. A total of 800 meat-eating respondents age 18 and up completed the survey. 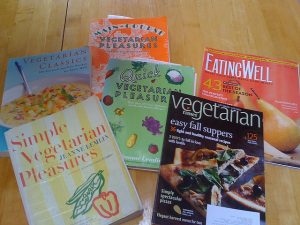 This study from Vegan Outreach compares the impact of two pro-veg pamphlets in order to measure the effectiveness of paying people to read outreach literature. In addition to seeing how much people changed their behavior based on being exposed to the different leaflets, the study also measured how much money (in the form of pay-per-read payments) might be required to effect pro-veg behavior change per person. The results provide insight into the effectiveness of different literature, as well as the kind of budgeting that might be useful for pay-per-read outreach programs.