This study found that seals were more likely to be vigilant when tourists were watching them, and seals preferred distance from large tourist groups.
ABSTRACT ONLY Only an abstract of this article is available.
PEER REVIEWED This article has been peer reviewed.
Summary By: Faunalytics | This is a summary of an external study | Published: July 10, 2014
Image by Unsplash user Steve Halama

This research describes the reactions of Harbour Seals to tourists studied over a 3-year period in Iceland. Onshore tourists observed seals on rocky islets. Seals were more vigilant when there were more tourists (or fewer seals), when tourists behaved more actively, and when it rained. They retreated to the farther islet during mating/moulting season, which was also peak tourist season. However, they continued to use the site, and did not leave the islets unless humans entered the water. The authors suggest training tourists to behave calming and quietly would minimize stress on seals.

“The effect of land-based seal watching on the haul-out pattern of harbour seals (Phoca vitulina) was investigated between June and August of 2008–2010 on Vatnsnes, NW Iceland. The results showed that the behaviour and spatial haul-out pattern of seals was affected by the tourists. In 2009 the seals were more likely to be vigilant during periods when tourists had access to the area, compared to a period when tourists were not allowed in the area. Also, in 2010 the likeliness of the seals being vigilant increased as the number of tourists in the area increased. In addition, seals were more likely to be vigilant when tourists behaved in an active way. During the post weaning period, which coincided with the peak of the tourist season, a significantly higher proportion of seals hauled out on the skerry located farthest away from land, compared to a skerry closer to land. Seals also preferred to haul out further away from land when the number of tourists in the area increased. Single tourists and couples behaved more passively compared to families and tourist groups of more than two adults. All tourist group types were significantly more active in an approaching zone than in the seal watching zone. Education of tourists, for example through a code of conduct built on these results, is advisable to minimise disturbance of seals in the area.”

The Importance Of Bumblebee Conservation

The steady reduction of global bumblebee populations has had detrimental effects on ecosystems, bringing about the necessity of dedicated measures to prevent further decline. 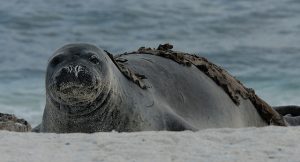 This study examined Slovakian undergraduate students' knowledge of, attitudes toward, and belief in myths about bats, finding that those more aware of the biology of bats had more positive attitudes about them than those without this knowledge.