Research shows that 1/3 of Americans support the use of gestation stalls, until they're exposed to information about what confinement actually looks like.
FULL TEXT The full text of this article is available.
PEER REVIEWED This article has been peer reviewed.
Summary By: karol orzechowski | This is a summary of an external study | Published: December 31, 2015
Photo by Flickr user farmsanctuary1 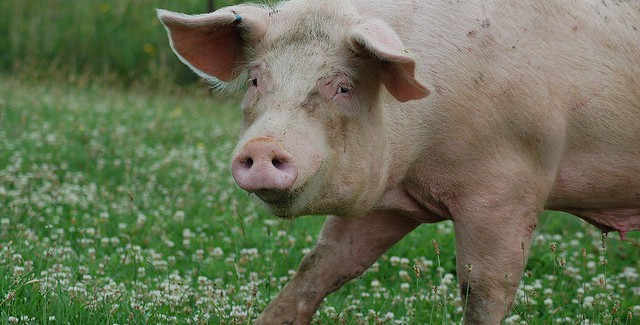 In factory farming, animals of various species are held in cramped and generally filthy conditions, and a focus on efficiency and profit leads to minimal animal welfare. Factory farming has increasingly become the norm in the last several decades. In particular, sows (female pigs) are often housed individually in very small pens called “gestation stalls” (or “crates”). Gestation stalls are a way to tightly control the movements of sows, who cannot turn around and in some cases cannot even stand properly. For farmers, this allows them to feed and keep sows confined and control breeding and nurturing habits. Alternative approaches such as group pens allow greater freedom of movement but are unfavourable for farmers because they allow animals to interact with each other, increasing the chances of aggressive interactions and potentially damaging profits.

Factory farming is controversial, and rightly so; researchers note that since “the social sustainability of animal production practices requires public acceptance, some means of assessing these attitudes is needed for effective policy.” When it comes to attitudinal research about pig farming specifically, there has been some opinion research among Europeans, but relatively little is known about attitudes in North America. In this study, researchers note that one problem with studying public attitudes is that the general public may be misinformed or unaware of how certain kinds of farming work, and their opinions might reflect these misconceptions. This research, therefore, had the dual goal of both evaluating North Americans’ opinions of gestation stalls and also looking at how those opinions might change as they become more informed.

Based on an online survey covering a variety of topics, researchers found that, before providing additional information, 56% of respondents supported group housing, 30% supported gestation stalls, 4% were neutral, and 10% didn’t support either system. Interestingly, because this paper was written by researchers with a somewhat “pro-gestation stall” perspective, they predicted that getting more information would actually increase support for the crates. However, after researching other housing systems, respondents’ support of group housing increased to more than 70%. The researchers speculate that the “problem” was that “respondents were able to consider as many different sources of additional information as they desired,” and that the majority looked at images and videos, while a smaller percentage (32%) said that they read scientific papers or looked at FAQs.

For animal advocates, this study shows that information about the plight of animals can be a powerful tool in changing public opinion. And public opinion, in turn, can be a powerful tool in changing policies toward animals. If people respond in similar ways to the respondents in this study, then it is quite possible that focused advocacy could result in more and faster change. That said, it’s important to note that 60% of those surveyed did not change their minds when exposed to new information. How do we reach those people? Perhaps through an appeal to let pigs behave naturally. Respondents in this survey placed great importance on “the provision of social interaction and environments that allow pigs to express natural behavior,” and that gestation stalls as a rule are “unsustainable.” This is great news for pigs and should be encouraging for advocates.