Nearly all Americans (84%) are unaware that feces is the primary source of foodborne pathogens in meat, but those with higher education levels had higher levels of knowledge on the subject.
FULL TEXT The full text of this article is available.
Summary By: Faunalytics | This is a summary of an external study | Published: July 20, 2012
Image by Pixabay user qimono

This PCRM 2001 survey found that the majority of Americans are unaware that feces are the source of foodborne pathogens on meat and poultry including salmonella, campylobacter, and E.coli.

According to this study, 84% of Americans do not know that feces on meat and poultry are the source of foodborne pathogens such as salmonella, E.coli, and campylobacter.

Survey respondents were asked, “When salmonella and other disease-causing bacteria are found on meat and poultry, which of the following do you think BEST describes where these bacteria originally came from?”

Respondents with college degrees, a household income equal to or greater than $50,000, or residence in a metropolitan area were more likely to know that feces are the originating source of disease-causing bacteria. 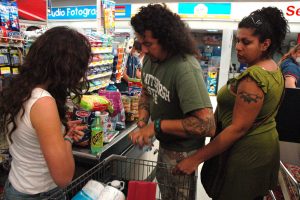 When it comes to information, the consumer-producer relationship is incredibly weighted in the producer’s favor. Rather than condescend or chide uninformed consumers, animal advocates need to help inform them.