Worldwide, more than 70 billion land animals are killed for food every year. Our series of charts based on United Nations data shows the trends by type of animal.
EXCLUSIVE Exclusive article or blog for Faunalytics.
Author: Bas Sanders | Published: October 10, 2018
Photo by Vladislav Klapin on Unsplash

Every year, billions of animals are slaughtered by the animal agriculture industry. The practice causes suffering on a massive scale that may be difficult for people to understand. Information provided by governments and industries are often focused on metrics like the weight of meat produced or consumed. As animal advocates, however, we care mostly about individual lives.

Taking that perspective, guest author Bas Sanders explores more than 50 years of animal slaughter trends. This series focuses on five main groups of farmed animals: cows, chickens, goats, pigs and sheep, based on data pulled from the Food and Agriculture Organization (FAO) of the United Nations. This post provides an overview of global animal slaughter. In the species-specific posts below, we explore the five animal types in depth. Their datasets can be found at the bottom of each page.

[Note: Though the FAO is unique in being able to provide global scale statistics on animal agriculture, there are questions about the overall accuracy of their statistics. A critique of FAO stats can be found here.] Obviously, the main story is that chickens are – by far – the most slaughtered land animal. The difference is so great that it makes the rest of the chart unreadable. In the updated chart below, we show chickens in thousands, which allows us to more easily analyze the results for other species. When one compares the slaughter charts with import and export charts (which are logically similar), we again see some evidence of a correlation between slaughter and trade. We examine this further for each of the six species in the articles linked below. When we adjust for population size by looking at per capita data, it’s interesting to note that the number of cows and sheep slaughtered per person decreases over the years (even though the actual number of slaughtered animals increased). The number of pigs, goats, and chickens slaughtered increased over time. 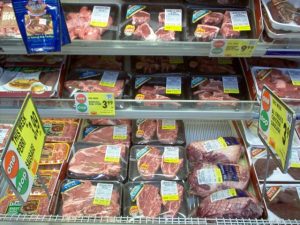