Farmed Salmon May Be Depressed

Researchers find that growth-stunted farmed salmon show chronic serotonergic activity and do not respond to acute stress — a state that could be interpreted as depression.
FULL TEXT The full text of this article is available.
PEER REVIEWED This article has been peer reviewed.
EXTERNAL STUDY This is a summary of an external study.
Summary By: Lukas Jasiunas | Original Study By: Vindas, M.A., Johansen, I.B., Folkedal, O., et al. (2016) | Published: January 24, 2020
Photo by WikiMedia user OgreBot Attribution-ShareAlike 4.0 International (CC BY-SA 4.0)

Due to the increasing number of fishes being farmed for human consumption, more and more academic interest is being directed towards farmed fish neurobiology and welfare. Concerns for the welfare farmed fishes, as well as those being used as replacements for mammalian biomedical models in research, are on the rise. In this study, a group of researchers from Northern Europe looked at how the brains of physically underdeveloped salmon react to stress.

In commercial fish farms, small fishes floating dully at the surface are a common sight. They typically exhibit anorexia and are inhibited behaviorally. Although such ‘dropouts’ are well known among farmers, very little is actually known about what leads to such disabilities. Surprisingly, growth-stunted fishes comprise up to a quarter of all farmed fish.

In the vertebrate brain, serotonin mediated signaling is vital for several key physiological functions such as the body’s energy regulation, neural plasticity, behavioral and emotional control, and responses to stress. However, prolonged serotonin activation is associated with chronic stress and stress-induced pathologies in mammals. Such states include depression-like behaviors. This paper represents the first physiological data, showing that growth-stunted commercially farmed salmon have elevated serotonergic activity; what’s more, this is determined as the main characteristic of the growth-stunted phenotype. Compared to healthy fishes, these salmon are suggested to experience chronic stress. In fact, the researchers show that the fishes’ brains are not responsive to additional acute stress, representing a classic example of when regulatory mechanisms are unable to react to further challenges, indicating a depressive state.

The authors propose that there may be a couple of reasons for why the fishes are so under-developed: firstly, they not that continuous subordinate social ranking in farmed fish populations was associated with chronic elevated serotonin levels by previous research; secondly, they note that Atlantic salmon, the most typically farmed species, have been put through rapid and intense domestication, challenging individuals with unnatural stressors. Examples include vaccination shortly after smoltification (the metamorphosis that prepares salmon for life in a saline environment). This form of stress may leave some individuals more vulnerable to contracting diseases or developing behavioral syndromes.

Although not eating, for example, may seem a mismatch between evolutionary programming and their current environments, the scientists propose that such inhibitions may have evolved in salmon to minimize stress exposure in vulnerable individuals. Think of the first stressor – being subordinate in a large, closely packed social group. It may make evolutionary sense to avoid the stresses that are brought on by competing for food, if you’re already vulnerable or injured.

More research is needed to corroborate the possibility that behavior and serotonergic profile of growth-stunted farmed salmon are very similar to those of mammals in depressed states. In terms of fish welfare, such knowledge is crucial for advancing efforts to improve the welfare of farmed fishes and, eventually, for the abolishment of fish farms more broadly. For their part, the researchers hope for a future where the medical field shifts its focus from curing such conditions to preventing them. Meanwhile, animal advocates will benefit from these findings as the clearly stressful conditions that farmed fish are exposed to are finally being recognized scientifically. This will undoubtedly help outreach efforts for improving the conditions for the billions of fishes that are bred commercially, and to help convince people to avoid farmed fish altogether.

Farmed Atlantic Salmon: A Life Not Worth Living?

Salmon are the most farmed fish in Europe. This blog dives deep into a report on salmon farming welfare, and whether the industry has any chance of meeting welfare criteria. 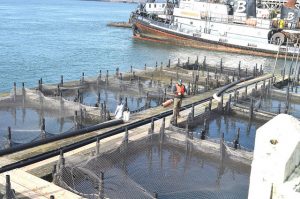 The Welfare of Salmon During Net-Pen Roundups

Net-penning salmon for aquaculture causes significant stress that stays constant over time. How can advocates improve their welfare before slaughter?