The Welfare of Salmon During Net-Pen Roundups

Net-penning salmon for aquaculture causes significant stress that stays constant over time. How can advocates improve their welfare before slaughter?
ABSTRACT ONLY Only an abstract of this article is available.
PEER REVIEWED This article has been peer reviewed.
ANIMAL RESEARCH This article involves research on captive animals, which Faunalytics opposes.
Summary By: Selena Darlim | This is a summary of an external study | Published: December 12, 2016
Photo by Flickr user waheagle_rick 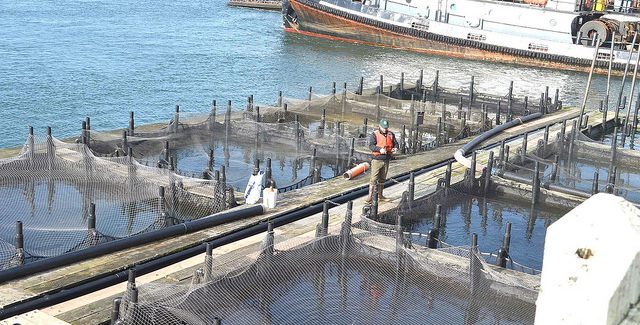 In some fish farming industries, Atlantic salmon and rainbow trout are transported from fish farms to separate processing facilities via well-boats. Once at the processing facility, fish are often crowded into net-pens from anywhere between one and six days before being pumped to the slaughter line. They are not fed during this time or for several days prior to transport. Previous studies haven’t shown that the transportation process increases fish stress levels, negatively impacts fish welfare, or decreases the fishs’ flesh quality.

This study, conducted at a salmon and trout facility in central Norway, was the first to examine the impacts of fish crowding and the conditions of the net-pens in depth. The facility has a total of eight net-pen units, each with a bulk volume of 24 by 24 meters. Researchers placed data loggers in the second net-pen and measured the dissolved oxygen (DO), temperature, depth, and current velocity of the water three times: prior to the scheduled slaughter when fish crowding occurs, and during two different crowding operations.

The researchers placed GoPro action cameras in the pens to observe fish behavior and ventilation rates throughout the duration of the crowding process. They also sampled the blood, muscle pH, and body temperature of several fish from each of the three test groups. The fish were promptly tested and killed with a cranial blow within five to ten seconds of being removed from the water. Then they were placed in ice storage and later measured for onset of rigor mortis. The physiological data samples showed that fish were more stressed than data from the loggers and GoPro cameras would suggest.

In terms of water quality, DO varied between 98% and 109% saturation before crowding began. During crowding, DO measured between 95% and 106% in the bulk volume of the net-pen and between 78% and 106% in the sweep-net itself. The researchers concluded that the fish therefore had access to oxygen at all times. Salinity, temperature, and current velocity stayed constant or varied within acceptable levels, and pH was similar to fresh seawater. The density of the fish in the bulk-volume of the net-pen was predictably lower in the second crowding operation since a number of fish had already removed.

Fish behavior did not appear to change during the crowding operation, and few signs of stress such as burst activity or white-muscle swimming were observed. The underwater footage revealed that the fish swam calmly among one another in irregular patterns when space was available for them to do so. However, as density in the sweep nets increased, it became harder for the fish to maintain their normal swimming patterns. Many of the fish near the bottom were forced to swim vertically and directly touch the sides of the net. Others swam in normal patterns but with variance in direction.

Ventilation rates of rainbow trout increased by nearly twice as much during crowding. Blood analysis confirms that both the trout and salmon were stressed. In unstressed fish, cortisol levels should be near zero. Results showed that the fish were stressed even prior to crowding. During crowding, the stress levels of fish in the both the bulk-volume and the sweep-nets jumped even more. Cortisol levels peaked after about 20 minutes and did not continue to increase after that. They returned to baseline levels about 24 hours after crowding.

The blood pH, blood lactate, white muscle pH, and rigor mortis onset-time demonstrated that the fish were significantly stressed from the very beginning of the experiment. The measurements of these same variables were not drastically different after crowding. It’s possible that the fish in the bulk-volume had still not recovered from a previous day’s crowding incident (before the start of the experiment). It’s also possible that the transportation or pumping of fish into the processing plant increased their stress levels. The effect of crowding on the blood chemistry and muscle pH of unstressed fish is therefore difficult to determine.

While the researchers admit that their data might not be representative of all Norwegian fish processing facilities, the results clearly demonstrate the importance of considering multiple variables when assessing animal welfare. If only swimming behavior and water conditions were taken into account, the fish would appear to be minimally stressed. Ventilation rates and cortisol levels showed that crowding does indeed have a stressful affect on fish. Body chemistry analysis also showed that the fish were stressed prior to the crowding process altogether. These results should prompt animal advocates and fish farmers to question welfare conditions in several parts of the fish-farming industry. 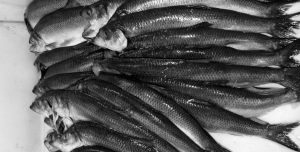 Based on their neurobiology and sense organs, fish likely have capacity to experience pain, fear, and stress, according to Animal Health and Welfare Panel.