Death At The Feedlot: The Role Of Euthanasia And Necropsy

The living conditions on feedlots are bad enough that sometimes cows must be euthanized before even being sent to slaughter.
ABSTRACT ONLY Only an abstract of this article is available.
PEER REVIEWED This article has been peer reviewed.
Summary By: Faunalytics | This is a summary of an external study | Published: April 21, 2016
Photo by Flickr user Greg Goebel 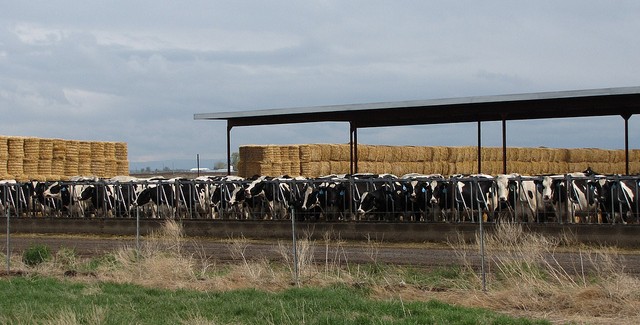 Cow welfare is often misunderstood by the general public. While some people know that chickens live a miserable life, whether as “broilers” or laying hens, many people see cows in pastures or feedlots and assume their lives must be better because they have access to the outdoors. Most animal advocates know, however, that cows in feedlots are subject to a wide range of potential health problems that can result in sickness, death, or may even warrant euthanasia. Some of the illnesses or conditions that can warrant euthanasia of cows include (but aren’t limited to):

Although it is possible that these conditions could be treated or addressed by veterinary care, the welfare or long-term health of the animal is not the utmost concern when they are going to be sold for slaughter. Some of the conditions above may actually prevent the cow in question from being sent into the food chain. Sadly, in those cases, it may be financially disadvantageous for farmers to keep the animal alive.

This published guide goes through the processes of feedlot euthanasia and necropsy in step-by-step detail. The researchers note that “the principal reason for considering euthanasia in a beef feedlot is to stop pain and suffering of cattle that have little chance of recovery or of pain abatement.” As a team of veterinarians, they feel they have an ethical obligation “to ensure cattle are treated humanely,” and that part of this includes “euthanasia, meaning a ‘good death.'” But what does a “good death” look like in the eyes of industry?

The authors of this paper outline the various methods used to euthanize cows. Injection is a common method, but there is no standardized chemical or substance. Helpfully, these researchers provide a list of chemicals that farmers should “NEVER USE.” They follow this advice with specific instructions for how to use a gun to perform euthanasia. No matter what method is used, however, the researchers note that a secondary technique must be performed to ensure the animal is actually dead. The report continues in this gruesome fashion and the researchers give detailed instructions for necropsy in cases where the cause of death of the animal is not immediately known.

This article indicates the kinds of standards (or lack thereof) that exist in the cow slaughter (“beef”) industry and how their deaths are calculated and managed. The information may be useful to advocates as part of a larger narrative of the lives of cows on feedlots. Even spending much of their lives outdoors, the confinement and other conditions experienced by cows also require scrutiny and consideration among both animal advocates and farmers.

The Live Animal Trade In The U.S.: A Review

The live animal trade industry in the U.S. is worth $3.5 billion and more than 100 million animals were ‘traded’ in 2016. In many cases, the U.S. exported the same animals they imported, resulting in unnecessary trade.