With supporting statistics and suggestions for advocacy, this article looks at the relationship between domestic violence and animal cruelty.
FULL TEXT The full text of this article is available.
PEER REVIEWED This article has been peer reviewed.
Summary By: Faunalytics | This is a summary of an external study | Published: August 12, 2016
Photo by Flickr user daoro 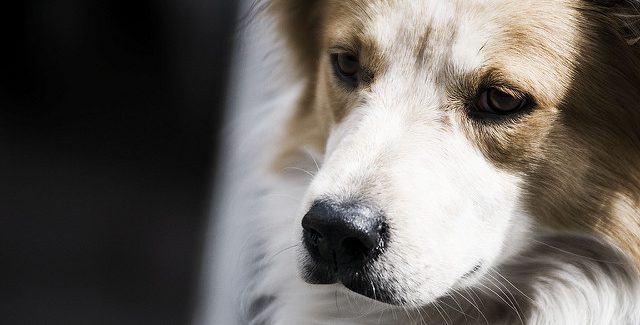 The link between domestic violence and animal cruelty is well known, but are researchers doing enough to shed light on this troubling connection? This paper, a senior honors thesis by a student majoring in Criminal Justice and Sociology at the State University of New York College at Brockport, argues that more needs to be done. There is a significant need for further research as well as greater societal awareness of both domestic violence and animal cruelty and how the two are linked.

The author provides an overview of the definition, forms, victim and perpetrator typologies, and possible causes and motivations behind both intimate partner violence and mistreatment of animals. She explores the relationship between the two, describing how children who are abused may mimic family members and take their own frustrations out on pets. The author also examined how abusers may threaten or harm pets as a way to control human victims of abuse. This form of control may also involve punishment or retaliation, displaced aggression, shock value, and amusement.

As the author notes, there aren’t a large number of research studies focused on this topic, but implications from those that exist are deeply concerning. In completed studies, results show that 71% of female pet guardians who enter shelters due to abuse also claim that their partners had harmed or killed their pets. One study that found that 41% of a sample of 307 men arrested for domestic violence had committed at least one act of animal cruelty. This compares to a national survey indicating that 1.5% of all U.S. adult men have committed animal abuse.

When it comes to future research directions on the link between domestic violence and animal abuse, the author states:

“One must take into account that this issue is fairly new within the scope of research and in order to make more definitive interpretations of the data available, there needs to be larger samples of perpetrators of domestic violence and animal mistreatment in order to generalize to the overall population. It is imperative to realize that this particular matter requires more prospective research.”

In other words, it’s an important topic, and much more work is needed. The author also recommends that research efforts take into account female abusers in the home. The paper calls for the creation of educational initiatives elaborating on the link between domestic violence and animal abuse and encouraging victims to come forward. Finally, she expresses hope that others can use her paper as a resource, as it not only provides an overview of the state of the literature in this area but also outlines available services for human and animal victims of abuse.