The Scale of Turkey Consumption on Thanksgiving

How many turkeys are killed for Thanksgiving? Numbers are hard to estimate, but it's about 37 million each year.
FULL TEXT The full text of this article is available.
Summary By: Karol Orzechowski | This is a summary of an external study | Published: January 4, 2016
Photo by Flickr user farmsanctuary1 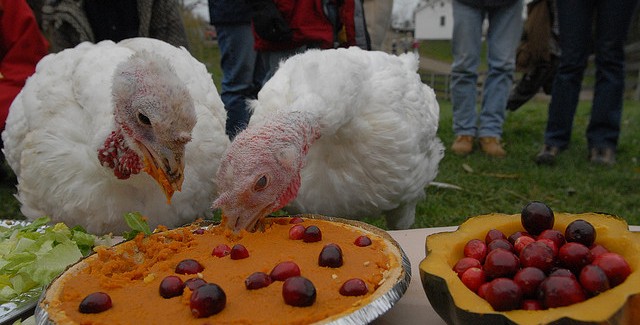 Sometimes it is hard – both psychologically and statistically – to wrap our heads around the actual scale of animal suffering. It’s challenging psychologically to do it, as it forces us to confront painful facts about what many millions of animals experience throughout their lives. It’s also challenging statistically, because nonhuman animals are not counted in the same way that people are. Animals are often counted based on what they produce. This means that, in many instances, we have better statistics about how many pounds of a certain type of meat are consumed annually than a number of individual animals were raised and killed to produce that meat.

This article from Counting Animals looks at the scale of turkey slaughter in the U.S. each year, and especially at Thanksgiving. Though meat from turkeys is consumed year-round, this article finds that there is a cyclical pattern to the consumption, with an unsurprising peak around Christmas time. Still, despite this peak, the author notes that it’s “not entirely straightforward to estimate the number of (turkeys) we kill for our consumption during the Thanksgiving season because turkeys are killed year-round at approximately the same rate.” The steady slaughter rate throughout the year is a business decision to consistently use machinery, labor and other to slaughter turkeys more efficiently. The turkeys eaten at Thanksgiving are generally killed earlier in the year and kept frozen.

According to this article’s review of the statistics for pounds consumed, cold storage, and adjusting for live weight vs. frozen weight, approximately 37 million turkeys are killed for Thanksgiving in the U.S each year. The author notes that it’s easy to be “overwhelmed by the scale of the massacre these numbers represent, but lose sight of the suffering endured by each hen or tom who lies dead on our Thanksgiving table.” This article was written, and is shared by us here at Faunalytics, with the hope that advocates will be able to use such statistics in their work for turkeys, to help to reduce the suffering and slaughter of turkeys.

Sethu, Harish. (2015). How many turkeys do we kill for Thanksgiving? Retrieved from the Counting Animals Website:  http://www.countinganimals.com/how-many-turkeys-do-we-kill-for-thanksgiving/