The Reality Of Norway Rat Management

Norway rats are perceived as a “pests” and subjected to lethal population control. This article assesses six methods used to kill them in the U.K., showing a need for more humane solutions.
FULL TEXT The full text of this article is available.
PEER REVIEWED This article has been peer reviewed.
EXTERNAL STUDY This is a summary of an external study.
Summary By: Casey Bond | Original Study By: Baker, S.E., Ayers, M., et al. (2022) | Published: May 10, 2022
Photo by Joshua J. Cotten on Unsplash

*Content warning: This summary contains information and descriptions that may be distressing for animal advocates to read.

Many animal advocates object to placing labels on animals such as “nuisance” or “pest,” and Norway rats are a prime example. These rats are found on almost every continent and are frequently demonized due to their size, diet, rapid reproduction, proximity to humans, and potential zoonotic illness transmission. The U.K.’s Prevention of Damage by Pests Act requires Norway rat populations to be regulated, and thousands of complaints about these rodents are made to U.K. animal control officers each year. Unfortunately, population control methods usually involve rat capture and killing.

Wild animal control officers have an ethical obligation to minimize the harms caused to animals. In fact, it’s against the law in the U.K. to cause “unnecessary suffering” to a wild animal under one’s control, for example a rat caught in a trap. However, millions (if not billions) of rats and mice are caught and killed each year, and the methods used likely cause more harm than those used to control other wild animals. Furthermore, the poisons and traps employed to kill rats and mice often, and unintentionally, harm other wild animals in the process.

In this study, researchers set out to investigate the welfare implications of six common methods used to kill Norway rats. These include anticoagulant rodenticide poisoning, cholecalciferol poisoning, glue trapping and cage trapping (both of which are followed by a concussive blow to the head), snap trapping, and non-toxic cellulose baiting. To carry out their research, they studied the available scientific research on each method and conducted workshops with fifteen rodent experts — biologists, veterinarians, animal welfare scientists, and rat control officers. Participants were asked to measure each rat control method according to an established animal welfare assessment tool:

Of the six rat control methods being considered, not one capture technique scored below a 5. Glue traps scored the worst in terms of capture techniques, at 7 out of 8, due to the prolonged, severe distress that rats experience when they are caught in such traps before being killed. On the other hand, death scores varied widely both across and within methods, as the experts noted that each method may cause more or less pain depending on how it’s manufactured and performs.

The three baiting and poisoning methods —  anticoagulant rodenticide, cholecalciferol, and cellulose — scored a 5 out of 8 for their capture technique, as rats may experience anxiety when approaching novel substances in their environment. However, the death scores for each poison were far more severe, ranging from G-H (causing extreme to severe impact for several days). When rats ingest poison, they may suffer from internal bleeding, extreme hunger and thirst, vomiting, abnormal breathing, dehydration, and more. They become weakened and prone to predation, and animals who eat the rats may in turn become poisoned. Because of these effects, the U.K. government has deemed poisoning methods “markedly inhumane.”

The two delayed trapping methods — cage trapping and glue trapping — involve capturing a rat who will later be killed by a concussive blow to the head. Cage traps scored a 5 out of 8 for capture method; rats are typically unharmed when caught in cages, but they experience fear and anxiety when they cannot move or carry out their normal behaviors. Glue traps, however, are notoriously distressing for rats. They may lose skin or body parts when trying to escape, and they may be stuck in the traps for long periods of time before being killed. As a result, glue traps scored a 7 out of 8 for capture welfare. When it comes to killing the rats, cage traps require rats to be removed prior to killing, while rats are typically killed directly on the glue traps. As a result, the experts determined that the death method for cage traps is more distressing, scoring a D versus B-D for glue traps.

Finally, snap traps are designed to kill rats instantaneously when they are caught. Rats may experience mild anxiety when approaching a novel trap, which led the experts to rank the capture score for this method as a 5. However, of all the methods used to kill rats, snap traps were viewed as the least inhumane — but only in some cases. When snap traps work effectively and render the rats immediately unconscious, experts ranked the killing method as A, “no impact.” However, snap traps often don’t work correctly, which causes rats more extreme suffering than other population control methods. As a result, the death figure for snap traps varied between A-F.

This information is highly distressing for animal advocates to read, but it’s important to understand what happens to Norway rats deemed as nuisance animals. Although the authors note that the methods are difficult to compare, one thing is clear: not one method confidently poses no welfare threats to the rats forced to endure them. This brings up a bigger issue — that is, the problems with pushing “lethal population control” to begin with. Humane birth control methods are approved for use in rats in the U.S., although the authors note that such technology hasn’t yet been approved in the United Kingdom. Given the reality that these animals face, it’s critical for animal advocates to call for non-lethal management methods.

With more and more advocacy resources being devoted to wild animal suffering, now is the time for animal advocates to raise awareness of Norway rats, and why we owe them a better fate than inhumane trapping and killing. Until society shifts toward a more humane coexistence with rats and other so-called “nuisance animals,” the authors recommend steps that may be taken to improve rat population control: snap traps should be regulated to ensure they work instantaneously, and wild animal control officers should be trained to cause as little suffering as possible. Preventative measures are also important: Animal advocates can educate the public about rodent-proofing their homes and workplaces, adhering to government food and health regulations, and engaging in proper hygiene to prevent rat encounters from happening in the first place. 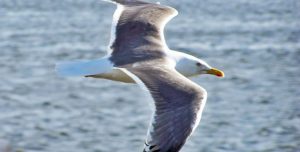 Demonization Of Wildlife: A Case Study With Sea Gulls In Britain

A look at how the media plays a role in perpetuating negative attitudes towards animals, and how it could shift the conversation more positively.