The growing trend of keeping companion dogs in Hong Kong is changing norms and challenging perceptions, including within high-rise apartment buildings.
ABSTRACT ONLY Only an abstract of this article is available.
PEER REVIEWED This article has been peer reviewed.
Summary By: karol orzechowski | This is a summary of an external study | Published: July 28, 2015
Photo by Flickr user maggieleung 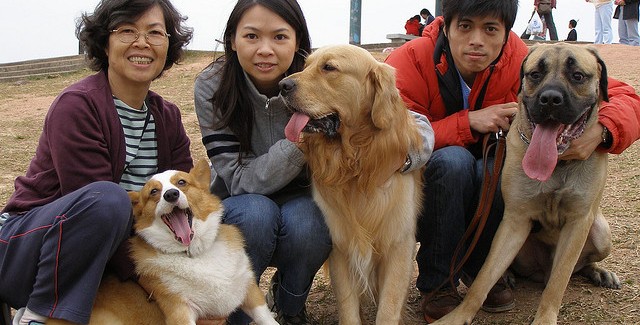 In North America, many of us probably take keeping companion animals for granted. This does not mean that we take the animals themselves for granted. Rather, that we take it as a given that we are able to keep companion animals in our homes without trouble. Many municipalities in North America forbid discrimination against tenants on the basis of keeping animal companions, while others simply have bylaws that limit the number of animals allowed in a single living space. In many countries, companion animal guardianship is both common and generally well-regarded.

However, this is not the case all over the world. In some countries, living with companion animals is not only uncommon, but controversial. It can be a flashpoint issue that reveals larger societal views around nonhuman animals, and forces people to consider where they really stand. In Hong Kong, companion animals ownership has become “rather polarized, and dog keeping has attracted heated debates in society in recent years.” The keeping of companion animals is stratified, and in many housing complexes, dogs are allowed in some places but not others. In a case study of one housing complex in particular, where dogs are allowed in two of the “phases” (buildings) and not the other, researchers wanted to better understand community perception of dog-keeping and reveal why people may live with dogs even when surrounded by negative feelings in the community.

From the outset, the housing complex charged a premium for dog-restricted properties, meaning that “the housing market generally perceives a negative value for the right to keep a dog in private housing.” The authors note that while this may indicate that the general public in Hong Kong does not prefer the presence of companion dogs in their living environment, this may also imply that the presence of dogs in high-density living situations is further problematic. The use of market mechanisms like price premiums on dog-restricted housing has been challenged in court and, in this case, the price differential between dog accepting and dog-restricted housing was reduced, but not eliminated. This means that, although the courts recognize the right to live with a companion dog, they also acknowledge that there are reasons why a dog-restricted property may be more desirable, and hence have an extra cost attached to it. On the flipside of this, being able to live with a dog commands a negative value in the market place, yet people continue to do so.

“Although a world without companion animals is unpleasant to consider,” the authors note that “not everyone in society likes to live with animals.” Overall, the article provides further evidence that attitudes relating to animals are changing, and the authors state that “animal rights activism is gaining its momentum in Hong Kong.” A further avenue of study is suggested – looking at people’s participation in “related social movements” in order to understand how keeping companion animals fits into larger shifts around animal advocacy. The right to keep a dog has sparked heated debates within Hong Kong (and other countries with similar situations), which shows that as societies gradually shift to a more animal friendly point of view, there are those who are willing to accept sacrifices to live with their animal companions now. The growing acceptance of and love for animals in many Asian countries is encouraging, and it will be interesting to keep a close eye on how the situation moves forward in the future.