Stray cats are not adopted as readily or quickly as owner-surrendered cats. What can shelters do to adjust for this bias?
FULL TEXT The full text of this article is available.
PEER REVIEWED This article has been peer reviewed.
Summary By: karol orzechowski | This is a summary of an external study | Published: October 27, 2015
Photo by Flickr user jonathan-leung 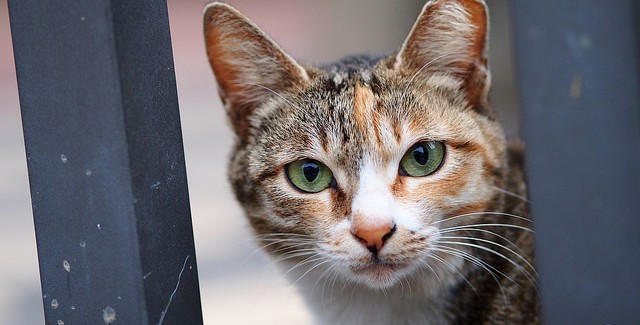 The ASPCA reports that about twice as many stray animals enter U.S. shelters as animals surrendered by their owners/guardians. Of the estimated 3.4 million cats that enter shelters every year, 41% are euthanized and less than 5% of those who come in as strays are returned to their homes. These statistics from the ASPCA suggest that a staggering number of stray cats housed in shelters never find a permanent home.

This study explores how potential adopters perceive owner-surrendered versus stray cats, how these perceptions impact the length of time it takes for shelter cats to get adopted, and whether individuals are biased against stray cats. For the first part of the study, the authors gathered data from the Nebraska Humane Society to determine if there was a difference in time to adoption between owner-surrendered cats and stray cats. They found that, on average, surrendered cats were adopted after 26 days and stray cats after 32 days.

In the second part of the study, the authors looked at how cats’ behavior impacted their time to adoption. The authors observed a sample of shelter cats interacting with individuals (“mock adopters”) who had no previous contact with them. The authors recorded the amount of time it took each cat to approach a mock adopter and how long that cat remained within a close distance to the adopter (61 cm or less). They also recorded how long it took for each cat to get adopted. Results showed that the stray cats who approached adopters more quickly were also adopted more quickly; however, approach time had no impact on time to adoption for the surrendered cats.

The final portion of the study explored whether people hold a bias against stray cats. The authors distributed surveys that included images of cats, some of which were presented twice at different points in the survey—once as an owner-surrendered cat and once as a stray cat. The authors presented the photos in a manner that would limit the chances of survey takers recognizing that the same cat appeared twice. Basic information such as name, sex, and age was provided for each cat, but information about previous living situation was only available for cats labeled as surrendered. Survey takers were asked to rate the likelihood that they would adopt each cat. Results showed that, overall, survey takers were less likely to adopt the stray cats.

The results of this study show that stray cats are not adopted as readily or quickly as owner-surrendered cats. Given these results, shelters may want to put more focus on developing social behaviors in stray cats, encourage these cats to appear friendlier by providing toys and other enrichment in their cages, and carefully word the background information they provide for these cats at the physical shelter and online to create more favorable perceptions among adopters. Of course, many shelters are already implementing these kinds of ideas to boost cat adoption rates.

Dybdall, K. & Strasser, R. (2014). Is There a Bias Against Stray Cats in Shelters? People’s Perception of Shelter Cats and How It Influences Adoption Time. Anthrozoos, 27(4).