This study finds that few tests have been designed to specifically examine positive emotions in pigs and suggests researchers look at their play behavior.
FULL TEXT The full text of this article is available.
PEER REVIEWED This article has been peer reviewed.
Summary By: karol orzechowski | This is a summary of an external study | Published: September 21, 2015
Photo by Flickr user rinalia 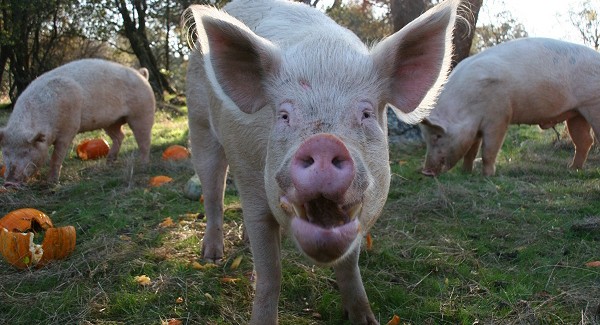 This study summary has been translated into Spanish by the Unión Vegetariana del Perú. Read it here / Leerlo aqui.

It’s becoming better understood and increasingly accepted that many animals have rich and complex emotional lives. However, scientifically studying the feelings of various animals is often a process fraught with contradictions. Though the emotions of some animal species have been observed in the wild or other natural settings, many animals are studied while confined in laboratory settings, or when living on factory farms. In addition, some animal experimentation takes place to examine the emotions of animals in the hope that the findings will tell us more about humans, losing sight of what the results might say about the animals themselves.

For this study, the authors reviewed and evaluated the range of ways that scientists have studied the emotions of pigs. They state that although “there is no agreement as to the definition and nature of emotion” among many researchers, pigs are considered to be sentient beings whose emotions reflect of their overall welfare. As they note, pigs are used extensively in food production (the vast majority of which is intensive in nature with highly crowded conditions), and are being increasingly used in biomedical research, in fields such as psychology, neuroscience, pain research, and psychopharmacology. In other words, the welfare and understanding of pigs matters, because they are exploited by numerous industries in shocking and painful ways.

In their review, the authors explore the various means by which pigs’ emotions have been examined. These range from open field tests (which observe the animals’ explorations within an enclosed space) and novel object tests (where the animals are given various objects at different times to test their memory and desire to interact), to elevated plus maze tests (an anxiety test based on exposing animals to open spaces they may be averse to), and more. The researchers note that there are “no formal criteria for behaviour tests of emotions in pigs,” but they suggest that some could be created that would allow the animals to display their natural behaviors and enable subtle changes in their response to be measured, while taking out the influence of the investigator on the results where possible.

This study states that there are “few tests designed to specifically measure positive emotion” in pigs, but that these should be developed because they are of primary importance in assessing pig welfare. In particular, the researchers suggest that studying play in pigs would be useful, as play behavior shows a variety of motivations and emotions. The authors say that “without suitable tests of emotional responses for pigs, we cannot accurately validate their use in biomedical research or assess welfare needs.” Though, in reality, most animal advocates would likely want these kinds of studies to result in an end to the confinement and mistreatment of pigs in farming, laboratories, and other settings.

In a world that needs to be fed, is there a system that can provide for animals, humans, and the environment?

Dairy cows' fearfulness and sociability are highly consistent over time. Their individual differences can affect the way they perceive and react to uncertainty in their environment.