Optimism (and Pessimism) In Pigs

New research shows that the living conditions of domestic pigs may determine how optimistic - or pessimistic - they are about their future.
ABSTRACT ONLY Only an abstract of this article is available.
PEER REVIEWED This article has been peer reviewed.
ANIMAL RESEARCH This article involves research on captive animals, which Faunalytics opposes.
Summary By: Faunalytics | This is a summary of an external study | Published: February 16, 2017
Photo by Flickr user Ben Bush 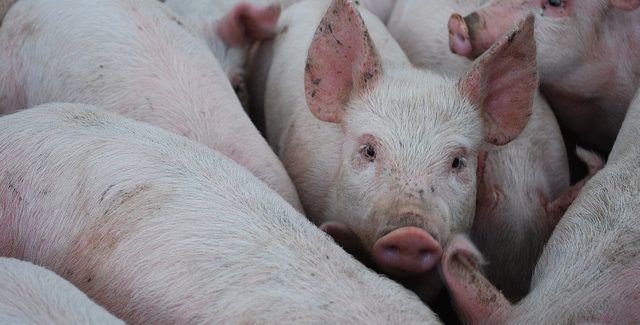 As animal advocates we  often need to demonstrate and justify that many of the animals we exploit lead emotional lives. The general public readily ascribes emotions such as happiness, sadness, anger, and loneliness to their companion animals but may be less apt to do so for farmed animals. It’s not likely, then, that the general public would ascribe moods to farmed animals. Moods are distinct from emotions in that they are less intense and not necessarily triggered by a specific stimulus. We might think of moods as a positive or negative but temporary state of mind. We know that humans who are in a good mood may perceive of their environment or react to stimuli more positively while those in a bad mood do so more pessimistically. This subjective perception of reality is known as cognitive bias, and it can affects one’s judgement. The current study examines whether mood and personality determine cognitive bias and impact judgement in domestic pigs.

The study involved housing 36 pigs in one of two environments known to influence their mood – one with “higher enrichment” and one with “lower enrichment.” The researchers conducted personality and cognitive bias tests on each population of pigs. The personality tests involved isolating individual pigs for short periods of time and then releasing them into an area containing an object that they had never seen before (i.e., a large white bucket or an orange traffic cone). The researchers recorded the amount of time it took the pigs to approach and explore the novel object. The cognitive bias testing involved measuring the time it took individual pigs to approach feeding bowls containing either desirable food items (i.e., sugar-coated chocolate treats), undesirable food items (coffee beans), or no food items.

Results of the personality test allowed the researchers to categorize the pigs as reactive or proactive. They hypothesized that proactive pigs would demonstrate optimism and reactive pigs pessimism in the cognitive bias test, regardless of the level of enrichment in their housing environments. Their data showed that proactive pigs were more likely to respond to bowls with no food items more optimistically, regardless of their housing conditions (pigs were considered optimistic if they approached the empty food bowl just as quickly as the the bowls with treats and coffee beans). However, pigs with reactive personalities were influenced by their housing environments, reacting more pessimistically in the cognitive bias test. Thus, the results show that “humans are not unique in combining longer-term personality biases with shorter- term mood biases in judging stimuli.”

The downside to many studies like this is that they are conducted on confined animals. While the results may be valuable for demonstrating cognitive similarities between animals and humans, advocates will no doubt look forward to a time when such studies are done at sanctuaries and not in captivity.